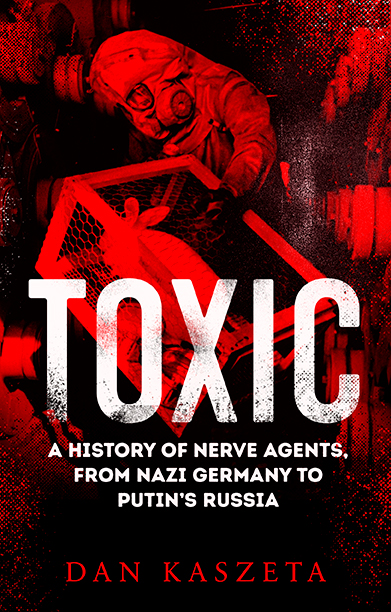 A History of Nerve Agents, From Nazi Germany to Putin's Russia

A dark and chilling story of the invention, proliferation and use of nerve agents.

Nerve agents are the world’s deadliest means of chemical warfare. Nazi Germany developed the first military-grade nerve agents and massive industry  for their manufacture—yet, strangely, the Third Reich never used them. At the end of the Second World War, the Allies were stunned to discover this advanced and extensive programme. The Soviets and Western powers embarked on a new arms race, amassing huge chemical arsenals.

From their Nazi invention to the 2018 Novichok attack in Britain, Dan Kaszeta uncovers nerve agents’ gradual spread across the world, despite international arms control efforts. They’ve been deployed in the Iran–Iraq War, by terrorists in Japan, in the Syrian Civil War, and by assassins in Malaysia and Salisbury—always with bitter consequences.

Toxic recounts the grisly history of these weapons of mass destruction: a deadly suite of invisible, odourless killers.

‘[Kaszeta] reminds us that even with an international convention banning them, the threat of chemical weapons being used outside conventional warfare is ever-present … [his] book is informative.’ — Nature

‘Kaszeta has a difficult theme but he avoids both jargon and the intricacies of the science. …You feel part of the discussion, helped through the complexities and invited to turn back to previous pages to better understand a line of history or thinking.’ — The Scotsman

‘Dan Kaszeta weaves an extraordinary narrative from the secret history of some of the deadliest substances ever created. From the plains of north Germany to the suburbs of Damascus he explains the development and use of nerve agents, employing his own deep knowledge, telling detail, and deadpan humour.’ — Mark Urban

‘Impeccably researched and engagingly written, Toxic tells a fascinating, dark tale, which has a chilling resonance for our own times.’ — Roger Moorhouse, historian, and author of The Devils’ Alliance: Hitler’s Pact with Stalin, 1939-1941 and First to Fight: The Polish War 1939

‘This is an accessible, well written and very useful book on a difficult and contentious topic. Offering a dispassionate account of the inception of nerve agents, Kaszeta does a great service by gathering up the history of these chemicals into one authoritatively written volume.’ — Dr Matthew Ford, University of Sussex, author of Weapon of Choice: Small Arms and the Culture of Military Innovation

‘From Sarin to Novichok, the twenty-first century demonstrates that the use of nerve agents … is an increasing threat to civilian populations across the world. … How we reached this moment should not be forgotten, and nor should that history be twisted by conspiracists pursuing their own agendas.’ — Eliot Higgins, founder of Bellingcat, the open-source investigative journalism website

‘Brings to life this macabre and secretive subject like never before … the investigatory work demonstrated by Kaszeta is clear and second to none. … [A] highly thought-provoking and
entertaining read.’ — The RUSI Journal

Dan Kaszeta is a specialist defence and security consultant of Lithuanian ancestry, who has long studied Baltic history. An associate fellow at the Royal United Services Institute and the author of Toxic (also published by Hurst), he has held positions in the US Secret Service and White House Military Office.