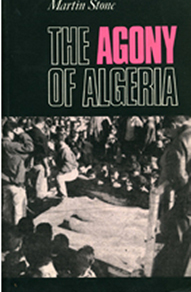 The Agony of Algeria

An analysis of the background to the current crisis in Algeria, placing in perspective the threats to the state posed by Islamic fundamentalism and economic mismanagement. It looks at the role of the National Liberation Front (FLN), international relations, the economy, and more.

Rioting in Algiers in 1988 brought to international attention the widespread dissatisfaction with FLN rule. Despite enormous oil revenues, Algeria’s economic performance since independence has been dismal, and this, combined with the FLN’s imposition of a one-party socialist state, masked deep cleavages that have since become apparent in Algerian society – between Berber and non-Berber, between the more-secular minded and devout Muslims, and between factions of the often corrupt FLN elite. Despite the FLN’s attempts at liberalisation after the 1988 disturbances, disillusionment has grown, culminating in the victory of the avowedly fundamentalist Islamic Salvation Front (FIS) in the 1991 general election — a victory later abrogated by the FLN. The FIS has since turned to violence, assassinating the country’s president and scores of soldiers. This study analyses the background to the current crisis, setting in perspective the threats to the state posed by Islamic fundamentalism and economic mismanagement.

‘No book ever came more perfectly on cue than Martin Stone’s The Agony of Algeria, with its mission to explain. Its thesis is that the issues left unresolved after Algeria won independence in 1962 are at the root of its current predicament. By grounding his argument in a tour-d’horizon of two millennia, Stone shows how complex those issues are.’ — Financial Times

Martin Stone is a regular contributor on Algeria, Morocco, and Tunisia for the journal Business Middle East.