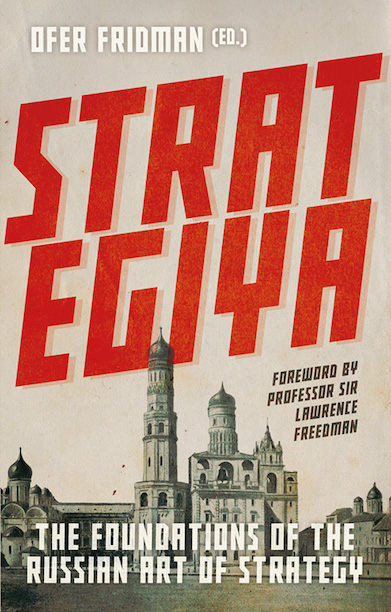 The Foundations of the Russian Art of Strategy

A fabulous resource for all those wishing to know more about the great works published in Russian that underpin Moscow’s strategic thinking.

In recent years, Western experts have generally portrayed the Kremlin’s actions as either strategic or tactical. Yet this proposition raises a very important question: how closely does the West’s interpretation of Russian strategy reflect the country’s own definitions?

While many military historians have sought to interpret Russian strategy, Strategiya takes a different approach. It brings together, in English, the classic works of the Russian art of strategy, which were rediscovered after the collapse of the Soviet Union. Instead of explaining his analysis of Russia’s contemporary strategy, Ofer Fridman offers his translation of and commentary upon the founding texts of Russia’s own Clausewitzes, Baron Jominis and Liddell Harts, who have been inspiring Russian strategic thinking—both its conceptualisation and its implementation—from the moment Moscow rejected the exclusive role of Marxism-Leninism in strategic affairs.

Russian contemporary strategists draw their inspiration from three main schools of thought. While works by Soviet military thinkers have already been translated into English, those by both Imperial strategists and military thinkers in exile have remained almost inaccessible to the Western reader. Filling this lacuna, Strategiya offers a fascinating glimpse inside the foundations of Russian strategic thought and practice.

‘Offering invaluable insights into influential areas of Russian military thinking that have, to date, remained largely unexplored in the West, Strategiya is a must-read for anybody seeking to gain a deeper understanding of the foundations of contemporary Russian strategy.’ — Bettina Renz, Professor of International Security, University of Nottingham, and author of Russia’s Military Revival

‘Strategiya sheds light on the roots of Russian strategic and military thought by providing important cultural-historical context. The argument is convincing, ambitious and clearly focused. An interesting and original contribution to the literature.’ — Andrew Monaghan, Director, The Russia Research Network, and author of Power in Modern Russia: Strategy and Mobilisation

‘By bringing the classics of the imperial Russian strategic tradition to an English-speaking audience, this book is an invaluable resource to those interested in Russia’s military.’ — David R. Stone, Professor in the Strategy and Policy Department, US Naval War College, and author of A Military History of Russia: From Ivan the Terrible to the War in Chechnya

‘Fridman introduces these never-before translated works in a well-written, lucid and compelling way. Strategiya is an important and timely addition to works on Russian strategy.’ — Eugene Miakinkov, Lecturer in War and Society, Swansea University, and author of War and Enlightenment in Russia: Military Culture in the Age of Catherine II

‘Through his excellent translations, Fridman provides valuable insight into how Russians view military science, the intersection of politics and strategy, and the necessity to conform, not to doctrine, but to situational circumstances and the “rules of reality”.’ — Paul Robinson, University of Ottawa, author of Grand Duke Nikolai Nikolaevich: Supreme Commander of the Russian Army

Ofer Fridman (PhD) is Lecturer in War Studies and Director of Operations at the Centre for Strategic Communication, King’s College London. His previous book with Hurst, Russian ‘Hybrid Warfare’: Resurgence and Politicisation, was chosen as a Foreign Affairs Book of the Year in 2019.