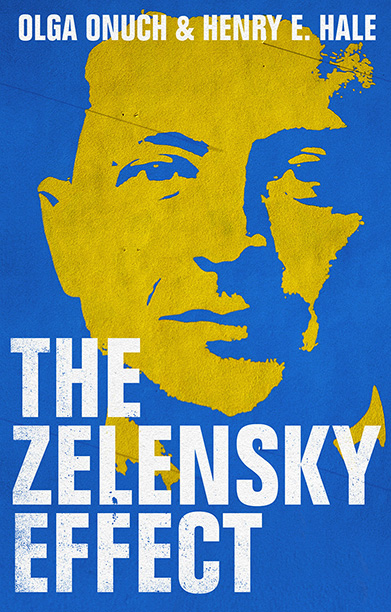 Part of the New Perspectives on Eastern Europe and Eurasia series

A compelling story of how ordinary Ukrainians saved their nation.

With Russian shells raining on Kyiv and tanks closing in, American forces prepared to evacuate Ukraine’s leader. Just three years earlier, his apparent main qualification had been playing a president on TV. But Volodymyr Zelensky reportedly retorted, ‘I need ammunition, not a ride.’ Ukrainian forces won the battle for Kyiv, ensuring their country’s independence even as a longer war began for the southeast.

You cannot understand the historic events of 2022 without understanding Zelensky. But the Zelensky effect is less about the man himself than about the civic nation he embodies: what makes Zelensky most extraordinary in war is his very ordinariness as a Ukrainian.

The Zelensky Effect explains this paradox, exploring Ukraine’s national history to show how its now-iconic president reflects the hopes and frustrations of the country’s first ‘independence generation’. Interweaving social and political background with compelling episodes from Zelensky’s life and career, this is the story of Ukraine told through the journey of one man who has come to symbolise his country.

‘Refreshingly data-driven and convincing on why [Zelensky’s] brand of Ukrainian-ness – emphasising “civic duty, the importance of Ukraine’s diversity, and the common quotidian experiences that bound Ukrainians together” – has such appeal.’ — TLS

‘The go-to book for grasping Ukrainians’ morale in the face of Russian aggression, and the determination of their president, who has demonstrated atmospheric levels of heroism and leadership–perhaps unlike any other in the world in recent decades.’ — Marc Berenson, Senior Lecturer at King’s Russia Institute, King’s College London

‘Drawing on years of research on Ukrainian politics and society, this timely study paints a fuller picture of Zelensky and the conditions that made him who he is today, and deserves a wide readership at this critical moment in European history.’ — Gwendolyn Sasse, Director of the Centre for East European and International Studies (ZOiS)

‘An essential book for understanding how a critical mass of Ukrainians converged around a vision of Ukraine grounded in democratic ideals, a European future and sovereign statehood.’ — Oxana Shevel, Associate Professor of Political Science, Tufts University, and an associate of the Harvard Ukrainian Research Institute and of the Davis Center for Russian and Eurasian Studies, Harvard University

‘Furnishing significant insight into Russia’s invasion of Ukraine, this sheds light as well on one of the most important (and improbable) leaders of the twenty-first century.’ — Michael Kimmage, Professor of History, Catholic University of America, and Visiting Fellow, German Marshall Fund

Olga Onuch is Senior Lecturer in Politics at the University of Manchester.