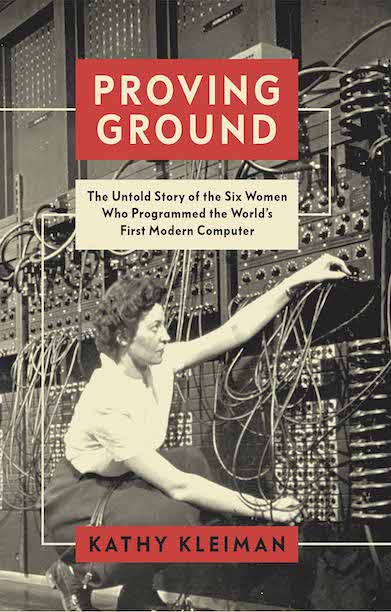 A fascinating, forgotten story of the six brilliant women who launched modern computing.

As the Cold War began, America’s race for tech supremacy was taking off. Experts rushed to complete the top-secret computing research started during World War II, among them six gifted mathematicians: a patriotic Quaker, a Jewish bookworm, a Yugoslav genius, a native Gaelic speaker, a sophomore from the Bronx, and a farmer’s daughter from Missouri. Their mission? Programming the world’s first and only supercomputer—before any code or programming languages existed.

These pioneers triumphed against sexist attitudes and huge technical challenges to invent computer programming, yet their monumental contribution has never been recognised—until now. Over a decade, Kathy Kleiman met with four of the original six ENIAC Programmers and recorded their stories. Here, with a light touch and a serious mind, she exposes the deliberate erasure of their achievements and restores the women to their rightful place as revolutionaries, bringing to life their camaraderie, their determination, and their rapidly changing world.

As big tech struggles with gender inequality and momentum builds in restoring women to history, the time has come for this engrossing story to be uncovered and celebrated.

‘A deeply satisfying book; it is authoritative and technical but comprehensible to a lay reader. And the story is a fine one, told in rich detail. Women remain considerably underrepresented in computer science today, and Proving Ground should be required reading in classrooms around the world.’ — TLS

‘Readers interested in the future of insurgency, disinformation, and contemporary challenges to democratic nation-states will find this a valuable study.’ — Air University Press

‘Kleiman became obsessed with learning the identities of all the earliest women programmers. The result of that magnificent obsession was a documentary in 2014 and this book, which melds social history with the major events of the second world war and the biographies of these six remarkable pioneers to produce an irresistible narrative.’ ― The Guardian

‘Kleiman’s persistence in sleuthing out the story of the ENIAC 6 programmers has resulted in an admirable contribution to the historical record and a labor of love.’ — Wall Street Journal

‘Kleiman has a novelist’s gift for crafting a page-turning narrative, and the one on offer is both revelatory and inspiring. Fans of Dava Sobel’s The Glass Universe and Margot Lee Shetterly’s Hidden Figures are in for a treat.’ — Publishers Weekly (starred review)

‘While early women programming pioneers Ada Lovelace and Grace Hopper have taken their place in the annals of computer history, Kleiman shows us that there were other women programmers — like the ENIAC 6 — who deserve to be recognised as well.’ ― Associated Press

‘Kleiman excels at capturing the pressures of working in technology during a highly stressful period in history, particularly when the results of technological trials directly impacted war efforts. . . [T]he inclusion of direct interviews with the women and the clear passion for their stories make Proving Ground a needed and welcome addition to the shelves of computer history.’ ― Booklist

‘A compelling account of a group of pioneering women.’ ― Library Journal

‘Kathy Kleiman’s debut nonfiction is a celebratory biography of the six women who helped program ENIAC, the first general-purpose computer. In engaging prose, she describes how the women found opportunities during World War II, while many men were overseas, and overcame discrimination and harassment to accomplish their important work.’ — Christian Science Monitor

‘Kleiman explores the lives of [the ENIAC six] and their ground-breaking work in this inspiring history.’ ― Arlington Magazine

‘Kathy Kleiman’s courageous pursuit across decades discovering and sharing the story of the extraordinary contribution of these first programmers and founding inventors gives us a gift that can change the future – empowering a more welcoming technical innovation culture for all.’ ― Megan Smith, Former United States Chief Technology Officer and CEO shift7

‘Everyone told Kathy Kleiman that the women she sought did not exist. Thankfully, she didn’t believe them … uncovering the stories of six groundbreaking women who battled sexism, complex trajectory equations, and blown vacuum tubes in order to program the world’s first digital computer. With unforgettable prose … a book so deeply inspiring that it has the power to completely alter how we see the technology field and the role of women within it.’ — Nathalia Holt, New York Times bestselling author of Rise of the Rocket Girls

‘Kleiman restores the ENIAC 6 to their rightful, lauded place in the history of computing … each of them comes vibrantly and vividly alive in her writing. Their story will serve as inspiration for generations of women in STEM.’ — Keith O’Brien, New York Times bestselling author of Fly Girls

Kathy Kleiman is a leader in Internet law and policy, teaching at American University Washington College of Law. She founded the ENIAC Programmers Project, whose documentary The Computers premiered at the Seattle International Film Festival, and won the Grand Jury Award For Best Short Documentary at the United Nations Association Film Festival.