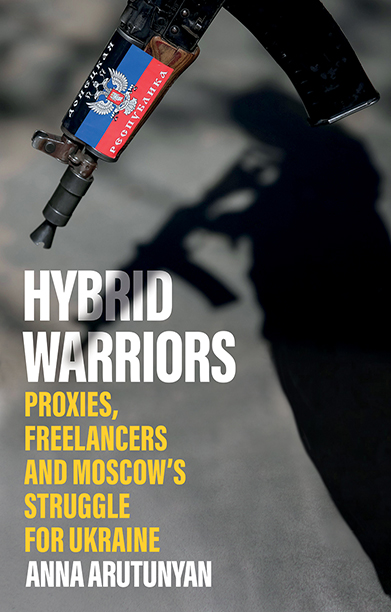 Focussing on Putin’s volunteer militants, Arutunyan’s reportage covers the pro-Russian insurgency and the war it sparked in eastern Ukraine.

Selected as one of the Diplomatic Courier’s, ‘Reviewer’s Best Reads of 2022’

The Russian government’s deniable use of rogues, businessmen, enthusiasts, mercenaries and political technologists confounded policymakers as Moscow waged a covert invasion of Ukraine in 2014. Did Crimea and Donbas reveal the Kremlin’s new ‘hybrid war’ playbook? Or was Moscow itself manipulated by the very forces it had unleashed? Given the disinformation and skewing of the narrative, it is no wonder that the international community has dramatically misunderstood the very nature of this war and was unprepared for the Kremlin’s sudden and brutal escalation in 2022.

As Russia’s full-scale invasion of Ukraine risks pitting the world’s great powers against each other, Hybrid Warriors traces the trajectory of the conflict from the bottom up. Starting from the first pivotal years in the 2010s, the book draws on unique interviews, reporting from the conflict zones, and wider on-the-ground research, to reconstruct the granular relationships between civilians, non-state actors, and the Kremlin that co-opted them. In the process, it speaks not just to the history of this conflict, but also to our wider understanding of how Putin’s Kremlin works and how it has prosecuted its war on Ukraine.

‘In her illuminating, well-researched book, Arutunyan sets out a nuanced argument about the Donbas conflict.’ — Financial Times

‘Truly one of the most insightful books released this year … [Hybrid Warriors] is sharp, incisive, insightful, and presents a much-needed complex and nuanced look at what is assumed to be a well-known story.’ — Diplomatic Courier

‘[This book] combines a deeply textured knowledge of ground-level politics with a well-theorised sense of how Putin’s regime works.’ — Inside Story

‘A nuanced and deeply researched account of the origins of the Russian-Ukrainian antagonism. The most subtle and detailed analysis of Russia’s policy toward Ukraine yet written. Hybrid Warriors is an indispensable book for understanding Russia’s march toward war.’ — Christopher Miller, Assistant Professor of International History, Tufts University, and author of Putinomics: Power and Money in Resurgent Russia

‘A masterful account putting a human face to a conflict ravaging Europe. Arutunyan’s gripping prose and the people’s stories she tells add nuance and depth to our understanding of Russia’s bid to conquer Ukraine.’ — Dimitar Bechev, Lecturer in Russian and Eastern European Studies, University of Oxford, and Visiting Scholar, Carnegie Europe

‘Two excellent books in one. Arutunyan’s approach differs from previous explanations of the 2014 “Russian Spring” by combining the machinations of various policy entrepreneurs and factions in a decentralised Kremlin with the agency of the Donbas rebels. She shows how the awkward compromises between them had broken down by 2022, setting the stage for the current war.’ — Andrew Wilson, Professor of Ukrainian Studies, University College London

‘A detailed and thoroughly researched account of Russia’s policy towards Ukraine. Showing the links between the Kremlin, Russia’s “policy entrepreneurs” and local activists, it demonstrates that what may look like conspiracy from a distance can often seem like chaos up close. Essential reading.’ — Kadri Liik, Senior Policy Fellow, European Council on Foreign Relations

Anna Arutunyan is a Russian-American journalist, author and analyst. She covered the 2014 war for USA Today from Crimea and Donetsk, and has since analysed the conflict for the International Crisis Group. Her book, The Putin Mystique: Inside Russia’s Power Cult, was published in over a dozen languages.