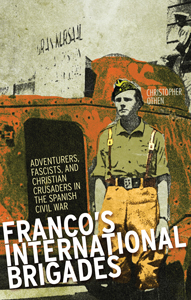 Adventurers, Fascists and Christian Crusaders in the Spanish Civil War

The amazing, often bizarre, story of Franco’s fellow travellers in the war against Republican Spain.

Foreign volunteers fought on behalf of General Franco and the Nationalists in the Spanish Civil War for a right-wing cause whose aim was to smash democracy. These assorted adventurers, fascists, and Catholic crusaders were on the winning side, but their role has remained strangely hidden until now. Men from Portugal and Morocco signed on for money and adventure. General Eoin O’Duffy organised 700 Irishmen in a modern Crusade; 500 Catholic Frenchmen fought in the ‘Jeanne D’Arc’ unit; and thirty British volunteers, including aristocrats and working-class fascists, also took up arms. Romanian Iron Guard extremists died at Majadahonda and an Indian volunteer fought in the fascist militia. There were Russians, Americans, Finns, Belgians, Greeks, Cubans, and many more. Goose-stepping alongside the volunteers were fascist conscripts from Germany and Italy, in training for the next world war. Foreigners, whether unknown individuals like British pilot Cecil Bebb or infamous figures like the German dictator Adolf Hitler, were essential to Franco’s victory. Without Bebb –– who flew General Francisco Franco from the Canary Islands to Spanish Morocco in 1936, a journey which was to precipitate the onset of the Spanish Civil War — the war would never have started; without Hitler, Franco would never have won.

‘This is a highly readable, engaging work that plugs a major gap in the literature on the Spanish Civil War, approaching the topic from an original angle –– that of the foreign volunteers who fought on the side of Franco and the Nationalists. It systematically covers all the volunteers from each foreign country and, in the process, elaborates on the wider historical context, both in the countries in question and in Spain itself. It thereby sets the Nationalist cause in Spain in a wider context of conservative, Catholic and fascist currents in Europe and the world, explaining the importance of the conflict in the thinking and perception of members of such currents.’ –– Dr Marko Hoare, Kingston University

‘An entertaining read which draws on many hitherto unexplored books, newspaper articles and personal sources, Franco’s International Brigades offers an intriguing insight into a ragbag of extreme right-wingers, adventurers and misfits.’ — Michael Alpert, author of A New International History of the Spanish Civil War

‘Informed, highly readable and packed with fascinating details, Franco’s International Brigades is a key book for understanding the international dimensions of the Spanish Civil War – it wasn’t all about romantic young men fighting for the Republic. Recommended both for newcomers to the subject and for those wishing to extend their knowledge of this most fascinating of periods in recent history.’ — Jason Webster, author of ¡Guerra!: Living in the Shadows of the Spanish Civil War

‘A fascinating account of a little-known subject. Othen shrewdly puts together biographies, memoirs and studies about Franco’s foreign fighters: from Moorish, Nazi and Fascist troops to the extremely diverse group of foreign volunteers anxious to battle communism.’ — Joan Maria Thomàs, Professor of History at the University Rovira-Virgili and member of the Real Academia de la Historia

Christopher Othen studied Linguistics and Literature at university, and Law at postgraduate level. Othen has worked as a journalist, legal representative for asylum seekers and English language teacher.