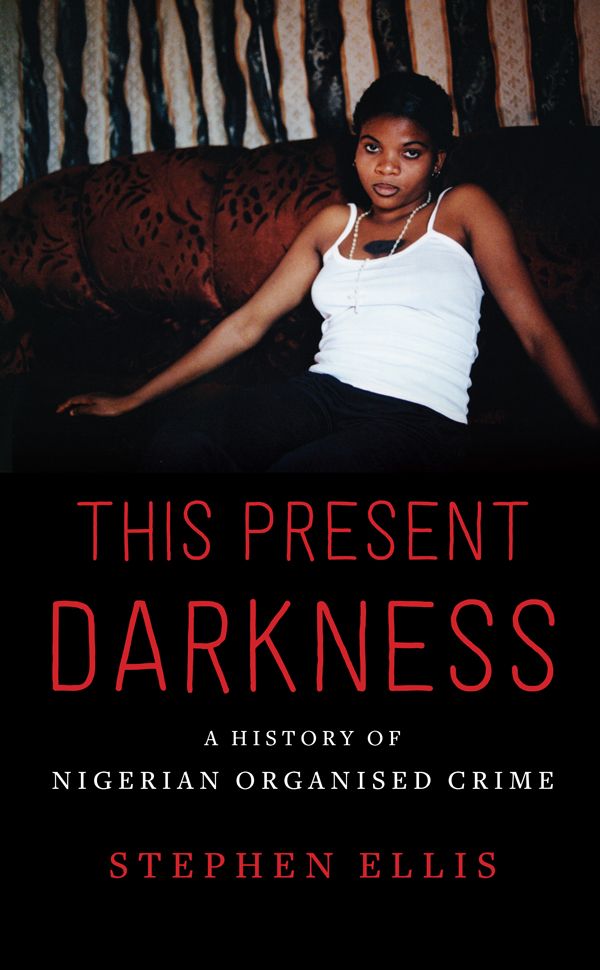 A History of Nigerian Organised Crime

The late Stephen Ellis’s last book is the first to chart this globally significant phenomenon, from ‘419’ advance fees and fraud, to smuggling, and people trafficking.

This Present Darkness analyses how Nigeria acquired its unfortunate reputation as an epicentre of global illicit trade and organised crime. Celebrated Africanist Stephen Ellis traces the origins of the phenomenon to the last years of colonial rule, when nationalist politicians offered government contracts in return for kickbacks.  Political corruption encouraged a wider disrespect for the law that spread throughout Nigerian society.

When the country’s oil boom came to an end in the early 1980s, young Nigerian college graduates headed abroad, eager to make money by any means, and Nigerian crime went global at the very moment new criminal markets were emerging all over the world.

Stephen Ellis’ last book is the first to chart this globally significant phenomenon, from drugs, fraud and cyber-crime, to smuggling and people trafficking.

‘Ellis [is] one of Britain’s most accomplished Africanists … this is the most deeply researched book yet on the nature and origins of Nigerian organised crime.’ — Financial Times

‘For decades Nigeria has suffered a doubly dubious reputation … This state of affairs is ably documented and explained by Stephen Ellis … in an excellent history of Nigerian organised crime.’ — The Economist

‘In his final book, the eminent Africanist Stephen Ellis explores how the country became a hotbed of illicit trade, endemic corruption and organised crime after the collapse of the oil industry. … Ellis paints a bleak and detailed picture of villains and victims big and small.’ — Times Higher Education

‘This is quite simply a dynamite book, striking first of all for the sheer depth of research that has gone into it. It is remarkable, too, in the way that it is able to fit this material into a bigger picture, created not only by a thorough familiarity with Nigerian history and politics, but also by an awareness especially of the spiritual dimensions of Nigerian life, and the ways in which these feed through into crime as well as virtually every other aspect of Nigerian affairs.’ — Christopher Clapham, University of Cambridge

‘Lucid, starkly realistic, and beautifully written, this book calls into sharp focus the nature of corruption in Nigeria. Ellis provides an insightful explanation for why reform programmes almost always end in disappointment. This book is a significant contribution to our understanding of the nature of the state in this most important African country. The richness and clarity of the empirical detail and the overall analysis validates Ellis’ position as one of the most consistently imaginative and creative thinkers of our time on the central issues of politics in Africa. More than any other book, this sober analysis of the deep historical social roots of corruption is sure to be controversial in some quarters and is guaranteed to set the terms of debate for years to come.’ — Will Reno, Professor of Political Science, Northwestern University, and author of Warfare in Independent Africa

‘The final work of Stephen Ellis, a brilliant Africanist, This Present Darkness is nothing less than an analysis of Nigeria’s history from the pre-colonial period to the present time. Based on original, archival research in five countries, its insights draw on expertise in anthropology, religion and history. It provides a depth of understanding of how Nigeria’s works and why that is unprecedented. His conclusions about crime, the Nigerian state, the pre-colonial, and the colonial past are bound to generate fresh thinking.’ — John Campbell, Ralph Bunche Senior Fellow for Africa Policy Studies, Council on Foreign Relations

‘A skilled and eclectic insider view of state corruption, drugs and crime in Nigeria, from one of the most dogged journalists and Africa researchers of his generation’ — Anjan Sundaram, author of Stringer: A Reporter’s Journey in the Congo

‘With sympathetic insight and sharp wit, Ellis presents an unparalleled analysis of how Nigeria became the notorious epicentre of global illicit trade, engaged in organised crimes as diverse as 419 frauds, trafficking in sex, drugs, and the country’s plentiful oil wealth. Cults, mysticism and secret societies that entrenched themselves in Nigeria’s post-colonial transition have created a society where becoming rich is a theology, and the importance of jujus outweighs that of justice.’ — Tuesday Reitano, Global Initiative against Transnational Organised Crime

‘Stephen Ellis was one of the pioneers of examining the complex relationships between crime, state, and society in West Africa well before the topic became fashionable. His last book draws on his lifetime of study and weaves together a detailed and complex story of the evolution of Nigeria and the transformation of its society through the prism of crime. In a book replete with juju, secret societies, early-colonial and modern-day slavery, prostitution, fraud, drugs, oil theft, pirates, and insurgents, what stands out most is the crime perpetrated by those who rule the Nigerian state. Ellis spares no-one: not the generals who take power, not the elected civilian leaders, and not Nigerian society. He shows a state that is a mechanism of plunder and a society that often sees crime as legitimate. Anyone who wants to promote rule of law in Nigeria should read it.’ — Vanda Felbab-Brown, Senior Fellow, Foreign Policy, The Brookings Institution

‘Few academics knew Nigeria as well as the late Stephen Ellis, and his last book showcases his understanding of this complex, intriguing, exasperating country. This is a fascinating portrait of Nigeria through the decades. While providing forensic — often hilarious —detail of a series of eye-wateringly ambitious scams, schemes and stings, Ellis probes the spiritual, cultural and historical impulses which explain why Nigeria became a byword for corruption. He manages to do so without lecturing or berating.’ — Michela Wrong, author of It’s Our Turn to Eat

‘a clear and urgent warning… Rigorously sourced … Ellis’ special concern in This Present Darkness is to try to identify how the culture of organised crime arose historically in Nigeria … It makes essential reading.’ — Paul Trewhela, politicsweb