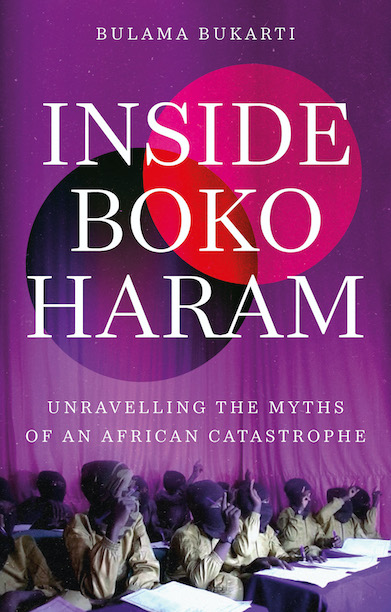 Unravelling the Myths of an African Catastrophe

Explores Boko Haram’s resilience, local support and economic networks, and its roots in a pre-colonial political order among the Kanuri people of Lake Chad.

This book presents a nuanced picture of the origins, rise, transformation, resilience, connections, financing and fragmentation of Boko Haram. The product of over a decade’s research, it draws on primary Hausa-, Kanuri- and Arabic-language sources and eyewitness accounts, including extensive interviews with dozens of associates, classmates and former friends of Boko Haram’s founders, as well as other actors, victims and witnesses.

As someone who grew up in the same towns as the movement’s leaders, and who speaks all the local languages, Bulama Bukarti is uniquely qualified to write on Boko Haram. Many of his friends and neighbours went on to join the group, or became its victims. Bukarti himself was personally targeted for recruitment by the infamous Abubakar Shekau, then repeatedly threatened by him.

Despite over a dozen books and a thousand reports on Boko Haram, even the most basic information about the group is inconsistent and often inaccurate. Much of the literature is replete with contradictions, unfounded theories, confusion, exaggeration and errors presented as knowledge. Bukarti shows that, while the group emerged with a local agenda and fed on local factors, it was morally inspired, theologically facilitated and financially supported at different times by the Taliban, al-Qaida and ISIS.

Bulama Bukarti is a Kanuri-speaking senior analyst at the Tony Blair Institute for Global Change in London, focusing on violent extremist groups in sub-Saharan Africa. A trained lawyer with a postgraduate degree from Kano University, and a current doctoral candidate at SOAS University of London, Bukarti hails from North-Eastern Nigeria.