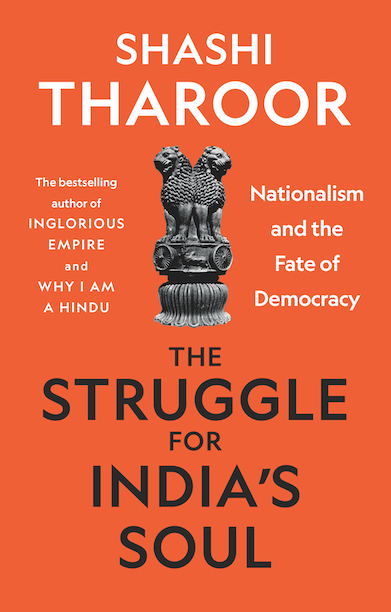 The Struggle for India’s Soul

Nationalism and the Fate of Democracy

Dissects how competing, increasingly strident visions of India will shape its destiny for decades to come.

‘If there were a prize for the most eloquent politician in India, Shashi Tharoor would be a favorite to win. […] ‘The Struggle for India’s Soul’ is a fighting, passionate book.’ — The Wall Street Journal

Over a billion Indians are alive today. But are some more Indian than others? To answer this question, central to the identity of all who belong to modern India, Shashi Tharoor explores hotly contested notions of nationalism, patriotism, citizenship and belonging.

Two opposing ideas of India have emerged: ethno-religious nationalism, versus civic nationalism. This struggle for India’s soul now threatens to hollow out and destroy the remarkable concepts bestowed upon the nation at Independence: pluralism, secularism, inclusive nationhood. The Constitution is under siege; institutions are being undermined; mythical pasts propagated; universities assailed; minorities demonised, and worse. Tharoor shows how these new attacks threaten the ideals India has long been admired for, as authoritarian leaders and their supporters push the country towards illiberalism and intolerance. If they succeed, millions will be stripped of their identity, and bogus theories of Indianness will take root in the soil of the subcontinent.

However, all is not yet lost. This erudite, lucid book, taking a long view of India’s existential crisis, shows what needs to be done to save everything that is unique and valuable about India.

‘If there were a prize for the most eloquent politician in India, Shashi Tharoor would be a favorite to win. […] The Struggle for India’s Soul is a fighting, passionate book.’ — The Wall Street Journal

‘A passionate defence of civic nationalism, it is many books rolled into one, full of erudition interspersed with anecdote. You find the raconteur and the public intellectual vying with each other for attention…but in the final analysis the book hangs together and the message is clear.’ — The Hindu

‘Arguably Shashi Tharoor’s most ambitious work yet… a book that showcases the power of his erudition and perspicacity.’ — The Wire

‘A passionate plea for an ideal of India, an India taken for granted by generations and now seemingly endangered by overt and covert ideas and ideologies that seek to segment it on imagined criteria of “us” and “them”.’  — Mohammad Hamid Ansari, former Vice-President of India

‘A must-read for the sheer brilliance of Tharoor as a writer and for the personal anecdotes and stories he has up his sleeve.’ — The Daily Guardian, India

Shashi Tharoor is a former UN under-secretary-general, a Congress MP in India, the author of twenty-three books, and the recipient of literary awards including a Commonwealth Writers' Prize. His Inglorious Empire: What the British Did to India was a Sunday Times bestseller and a Financial Times Book of the Year.