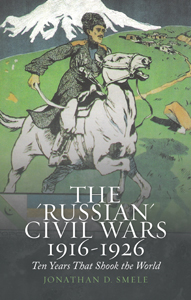 Ten Years That Shook the World

An original interpretation of the wars that ravaged Russia for decades after the toppling of the Romanovs.

This volume offers a comprehensive and original analysis and reconceptualisation of the compendium of struggles that wracked the collapsing Tsarist empire and the emergent USSR, profoundly affecting the history of the twentieth century. Indeed, the reverberations of those decade-long wars echo to the present day — not despite, but because of the collapse of the Soviet Union, which re-opened many old wounds, from the Baltic to the Caucasus. Contemporary memorialising and ‘de-memorialising’ of these wars, therefore form part of the book’s focus, but at its heart lie the struggles between various Russian political and military forces which sought to inherit and preserve, or even expand, the territory of the tsars, overlain with examinations of the attempts of many non-Russian national and religious groups to divide the former empire. The reasons why some of the latter were successful (Poland and Finland, for example), while others (Ukraine, Georgia and the Muslim Basmachi) were not, are as much the author’s concern as are explanations as to why the chief victors of the ‘Russian’ Civil Wars were the Bolsheviks. Tellingly, the work begins and ends with battles in Central Asia — a theatre of the ‘Russian’ Civil Wars that was closer to Mumbai than it was to Moscow.

‘Jonathan Smele’s authoritative The “Russian” Civil Wars emphasised the multinational and panoramic nature of the military conflict that overtook the Russian Empire in its dying years.’ — Financial Times

‘The most ambitious account on the subject since Evan Mawdsley’s magisterial The Russian Civil War … Assiduous and voracious, [Smele] is also intrepid … It is a bracing achievement: this is a book that will long be required reading.’ — Robert Service, The Times Literary Supplement

‘Analytical, colourful and not only clearly researched but beautifully written, Smele’s work is vivid and important, expounding as it does the acute significance of the Russian civil war for the history of the world today.’ — The Spectator

‘Adds a valuable dimension to our understanding of what is conventionally depicted as the Red-White civil war of 1917-21.’ — The Financial Times

‘An elaborate yet exquisite narrative of the Russian civil wars.’ — Europe-Asia Studies

‘The author’s erudition and assimilation of a broad array of sources is astounding. The . . . endnotes and . . . bibliography are extremely useful to scholars and a fascinating read in their own right. At its best the narrative is full of unfamiliar details, quirky excursions, bold assertions, and colourful anecdotes. Scholars interested in this period should add it to their shelf. . . [The] depictions of the devastation of urban life throughout the Soviet Union and the raw violence of all sides in the war are powerful. . . the book effectively challenges many commonly held views about the period.’ — Slavic Review

‘Jonathan Smele has written a very important and ambitious book. He puts the Russian Civil War in the broadest possible context, demonstrating how it determined not only the course of Soviet history, but also the way the twentieth century played out. The product of enormous learning, it is well written and intelligently argued.’ — Peter Kenez, Professor Emeritus, University of California Santa Cruz, and author of A History of the Soviet Union from the Beginning to the End

‘A stupendous book, as readable as it is scholarly. A leading authority presents an engaging narrative and a penetrating analysis of a key episode in Russian and world history.’ — Paul Dukes, Emeritus Professor of History, University of Aberdeen

‘Smele sets out a good case for treating the October Revolution as only one among a whole complex of events, the “Russian civil wars”, which lasted some ten years and determined much of our life throughout the twentieth century.  He has marshalled a huge amount of information derived from other, more restricted accounts, and created a coherent narrative out of them.  Should become standard reading for students of twentieth century world history.’ — Geoffrey Hosking OBE, Emeritus Professor of Russian History, University College London

‘Jonathan Smele tells the history of what he calls the “Russian Civil Wars” with admirable clarity, offering an original and consistently thought-provoking interpretation. He makes a compelling case that the many-layered developments that took place across the former Russian empire between 1916 and 1926 were of paramount significance for the history of the twentieth century. The book is engagingly written and impressively researched, the analysis is discerning and dispassionate, making this study easily the best to date.’ — Stephen Smith, Professor of History, All Souls College, University of Oxford and author of The Oxford Handbook of the History of Communism

‘Iconoclastic but erudite, provocative but convincing, this is a study of the “Russian” civil wars for the 21st century. Smele is right: the demise of the USSR makes the civil wars more not less important: more than a struggle between Reds and Whites, the foundation myths of all post-Soviet states are centred on these struggles.’ — Geoffrey Swain, Alec Nove Chair in Russian and East European Studies, University of Glasgow and author of Eastern Europe Since 1945

Jonathan D. Smele teaches Russian and European History at Queen Mary, University of London and has published extensively on the Russian revolutions and civil wars. For a decade, he was Editor of the journal Revolutionary Russia. His most recent work is the two-volume Historical Dictionary of the ‘Russian’ Civil Wars, 1916–1926.