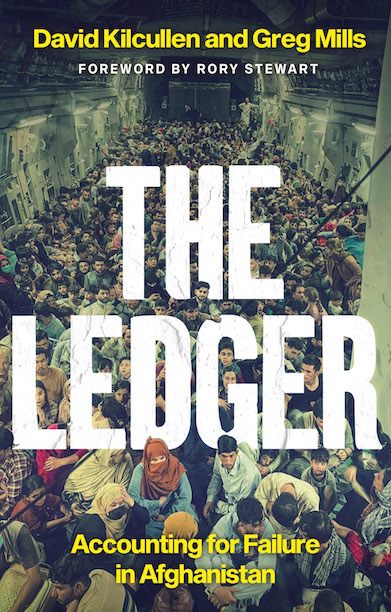 Accounting for Failure in Afghanistan

With a Foreword by Rory Stewart

From two seasoned strategic advisers, a withering critique of the West’s chaotic withdrawal from Afghanistan, looking to the future in that country and beyond

‘These things happened. They were glorious and they changed the world,’ said Charlie Wilson, of America’s role backing the anti-Soviet mujahideen. ‘And then we fucked up the endgame.’ With no support for Afghanistan after that war, the vacuum was filled by the Taliban and bin Laden. The Ledger assesses the West’s similarly failed approach to Afghanistan after 9/11–in military, diplomatic, political and developmental terms.

Dr David Kilcullen and Dr Greg Mills are uniquely placed to reflect backwards and forwards on the Afghan conflict: they worked with the international mission both as advisers and within the Arg, and they have considerable experience of counterinsurgency and stabilisation operations elsewhere in the world. Here these two experts show that there is plenty of blame to go around when explaining the failure to bring peace to Afghanistan after 9/11.

The signs of collapse were conveniently ignored, in favour of political narratives of progress and success. Yet for Afghans, the war and its geopolitical effects are not over because NATO is gone–Afghanistan remains globally connected through digital communications and networks. This vital book explains why and where failings in Afghanistan happened, warning against exceptionalist approaches to future peacebuilding missions around the globe.

“I’m appalled that not one single person has been held accountable” over the Afghanistan withdrawal, says David Kilcullen. “This is a massive morale boost for every terrorist group on the planet. We have probably just generated another decade’s worth of the war on terrorism.” pic.twitter.com/WXu29CN82G

‘[The Ledger] is a clear-eyed analysis made with the surgical precision of two insiders who saw, firsthand, the legion of small ways that the war was lost when it could have been won.’ — The Sunday Times

‘A failure to understand the ties that bind Afghanistan and its people underpins the west’s 20-year struggle there, a history whose first draft is masterfully captured in The Ledger.’ — Financial Times

‘Probably the best insider account yet on why the mission failed, written by two of the coalition’s most experienced advisers. […] A well-written and timely inquest into the West’s Afghanistan fiasco.’ — The Telegraph

‘The Ledger is not a book of dread and sensationalism. It is a cool and forensic dissection of what a disaster the search for Al-Qaeda following the attack on their Afghan hosts, the Taliban, was to become. […] More than a mere polemic, this is a fine book.’ — The Scotsman

‘This explanation of the failure of the international mission and fall of Kabul contains salient lessons for us all, now and in the future.’ — General Mohammad Yasin Zia, former Chief of the General Staff, Afghanistan

‘The Ledger explains the reasons for yesterday’s failure in Afghanistan. It also clarifies the imperative for tomorrow’s international engagement.’ — Commander Ahmad Massoud

‘What went wrong and what went right in Afghanistan? This brilliant analysis by two people who were there has many of the answers.’ — General Sir Nick Carter, Chief of the Defence Staff, United Kingdom

‘Based on years of courageous fieldwork, The Ledger’s careful analysis is a timely reminder of what happens when internal and external state-building efforts are misaligned.’ — Ellen Johnson Sirleaf, Nobel Peace Laureate, former President of Liberia

‘Clear-minded, and closely involved for many years in the West’s Afghan project, the authors of this passionate and important book are determined that we do not repeat elsewhere the shameful way it ended.’ — Sir Rodric Braithwaite, author of Afgantsy

‘Based on the authors’ extensive first-hand experience in Afghanistan and peace missions elsewhere, The Ledger goes to the heart of why the Afghan mission failed and what we must do to avoid future, similar disasters. Read it, and learn.’ — Karin von Hippel, Director-General, Royal United Services Institute

‘The authors had their boots on the ground and it shows in this searing account of what went wrong in Afghanistan.’ — Ambassador Juan-Carlos Pinzon, former Minister of Defence, Colombia

‘With immense elegance, empathy, respect for Afghans, and deep understanding of the local terrain and context, Kilcullen and Mills explain something otherwise very difficult to understand: how a comparatively small Taliban force was able to achieve such a stunning and rapid victory over a large, conventional army.’ — Rory Stewart, former UK Secretary of State for International Development

‘Few have enjoyed the access and experience of Kilcullen and Mills in Afghanistan this century, evident in the richness of their critique of Western attempts to, first, stabilise the country and, later, rebuild it. The Ledger brings to life the dilemmas and bitter lessons of the policy-maker, diplomat and military professional alike, and lays out a workable strategy for building peace.’ — Swaran Singh, Professor for Diplomacy and Disarmament, Centre for International Politics, Organisation and Disarmament, Jawaharlal Nehru University

‘In accounting for success and failure in Afghanistan, The Ledger provides crystal-clear do’s and don’t’s for future, similar missions.’ — General Richard B. Myers, former Chairman of the Joint Chiefs of Staff; President, Kansas State University