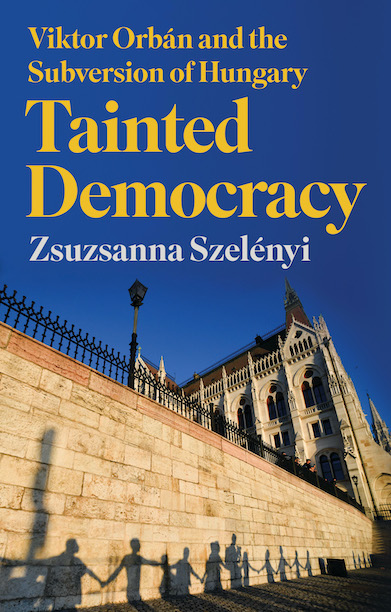 Viktor Orbán and the Subversion of Hungary

The inside story of Hungary’s descent into autocracy at the hands of Viktor Orbán, told by a former parliamentary ally turned outspoken political opponent.

Zsuzsanna Szelényi in conversation with RevDem editor Ferenc Laczó about the main characteristics of the Orbán regime and Hungary’s descent into autocracy:

‘There is much illuminating detail… in Tainted Democracy by Zsuzsanna Szelényi. Read her book — you may learn a lot.’ — Tony Barber, Financial Times

‘[A] masterly new study of the rise of Fidesz and Orbán. Szelényi’s Tainted Democracy … is detailed and thorough. It offers a rigorous account of how Orbán bent an initially liberal party to his will, and how he and his acolytes have subverted institution after institution.’ — The Times Literary Supplement

‘If you are interested in the gloomy fate of modern Hungary, illiberalism and how a European country can be subverted from the inside, then this is the book for you. Zsuzsanna Szelényi has lived and breathed Hungarian politics for more than thirty years which means that this is the right book, written at the right time, by the right person.’ — Tim Judah, Special Correspondent for The Economist, and author of In Wartime: Stories from Ukraine

‘Szelényi’s insider account relates with forensic detail how Orbán—inspired by Berlusconi and Putin—captured Hungarian voters and, in the process, enriched himself and his cronies at the expense of Hungarian democracy. This is a sobering but absolutely essential narrative of aborted democracy in a country that once held such promise.’ — Kati Marton, journalist, and author of The Chancellor

‘A cautionary tale for the whole of Europe. With unrivalled insight and precious autobiographical detail, Zsuzsanna Szelényi traces Hungary’s descent into authoritarianism under Viktor Orbán.’ — Dimitar Bechev, Lecturer in Russian and East European Studies, University of Oxford, and author of Turkey Under Erdoğan: How a Country Turned from Democracy and the West

‘A definitive insider’s account of how Viktor Orbán dismantled Hungarian democracy and replaced it with an autocratic and profoundly corrupt regime. Szelényi’s vivid chronicle will leave readers aghast but forewarned–saddened by the lost promise of 1989 in Hungary but better equipped to recognise any erosion of democracy in their own countries.’ — R. Daniel Kelemen, Professor of Political Science & Law and Jean Monnet Chair in European Union Politics, Rutgers University

Zsuzsanna Szelényi interviewed on The Monocle Daily about how Viktor Orbán has subverted Hungarian democracy: