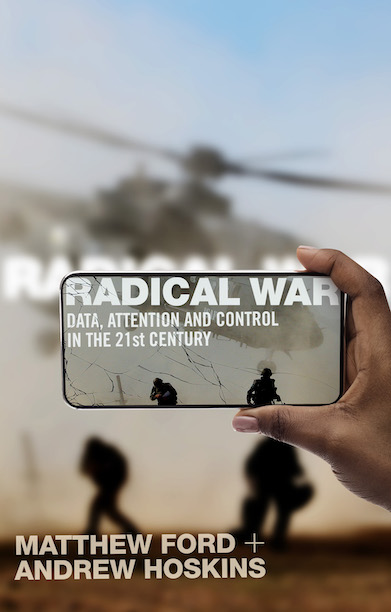 Data, Attention and Control in the Twenty-First Century

‘The essential guide to the new war of all against all, where everything is weaponised, and where the lines between peace and conflict are forever blurred.’ — Peter Pomerantsev, author of This Is Not Propaganda: Adventures in the War Against Reality

‘As the security elites struggle to understand how information fits with the traditional domains of warfare, Ford and Hoskins show how information has become the overarching domain, with the smartphone, not the rifle, as the granular instrument of combat. A startling rethink of the twenty-first-century battlefield that blows away the traditional boundaries between state, society and the military.’ — Paul Mason, journalist

‘A fascinating assessment of the impact of our ubiquitous access to, and employment of, information and media. Positing a radical vision of war in which perception is reality, this book challenges our norms and, while you might not necessarily like it, you should probably read it!’ — Brigadier Khashi Sharifi OBE, British Army

‘Radical War recasts the means, methods–and increasingly memes–by which war today is waged. Excavating a transformative war-media nexus, it provides an astute analysis of why the battlefields of conventional geopolitics are migrating, and mutating into social media events.’ — Nisha Shah, Associate Professor, School of Political Studies, University of Ottawa

‘The Nazis went through a remarkably complicated process of communication to realise the industrial extermination of Europe’s Jews. In the post-modern age, this book shows, in stark detail, how the flattened structures of society, the end of analogue archives and instantaneous communications could simplify any decision-making process working towards genocide.’ — Philip W. Blood, historian, and author of Birds of Prey

Matthew Ford is Senior Lecturer in International Relations, University of Sussex; founding editor of the British Journal for Military History; and author of Weapon of Choice.