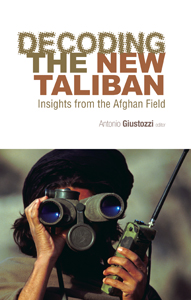 Insights from the Afghan Field

‘An outstanding and important collection—just the sort of locally specific, openly debatable, scholarly analysis … that will be required more and more if the international community is ever to understand the insurgents … as up-to-date as scholarship can be.’– Pulitzer Prize-winning journalist Steve Coll in The New Yorker

While the ‘New Taliban’ looms large in the global media, little is known about how it functions as an organisation. How united is it? Are its structures relatively strong, or surprisingly brittle? Are personal relations and networking based on traditional ties of kin and ethnicity the sum total of its organisational capabilities, or are efforts underway to build more institutionalised chains of command? How united is the New Taliban, and how does it maintain whatever degree of unity it has, given the attrition it has suffered in the field? And to what extent is its leadership able to impose switches in strategy among the rank-and- file, given Afghanistan’s difficult geography and poor communications? These are among the questions answered in this book by a renowned cast of practitioners, journalists and academics, all of whom have long field experience of the latest phase of the New Taliban’s insurgency in Afghanistan. Decoding the New Taliban includes a number of detailed studies of specific regions or provinces, which for different reasons are especially significant for the Taliban and for understanding their expansion. Alongside these regional studies, the volume includes thematic analyses of negotiating with the Taliban, the Taliban’s propaganda effort and its strategic vision.

‘… an outstanding and important collection—just the sort of locally specific, openly debatable, scholarly analysis … that will be required more and more if the international community is ever to understand the insurgents … as up-to-date as scholarship can be.’ – Pullitzer Prize-winning journalist Steve Coll in The New Yorker

‘Some evidence that the Taliban have moved on since they were in power is provided by Antonio Giustozzi, who has edited a collection of essays entitled Decoding the New Taliban… Giustozzi argues that the Taliban realise their old position on education was self-defeating and lost them support, and the line is now being reversed. In Lashkar Gah, the capital of Helmand, according to Tom Coghlan, one of Giustozzi’s contributors, people in September 2008 ‘reported a strikingly less repressive interpretation of the Taliban’s social edicts.’ They no longer ban TV, music, dog-fighting and kite-flying; nor do they insist on the old rule that men grow beards long enough to be held in the fist.’ — Jonathan Steele, London Review of Books

‘Provides a nuanced micro-level view of the country… One of the most significant contributions … is the insight into the modus operandi of the insurgency.’ — Foreign Affairs

‘Far removed from the usual clichés and hasty generalisations, Decoding the New Taliban offers the reader a keen, first-hand sense of field research in Afghanistan, with all its uncertainties and contradictions. the authors, working on different regions or themes, offer new data and thought-provoking analyses. this book is an important step in understanding our failure in the current war.’— Gilles Dorronsoro, Carnegie Endowment for International Peace and author of Revolution Unending: Afghanistan 1979 to the Present

‘Antonio Giustozzi has succeeded in drawing together an excellent collection of perceptive essays from eminent and distinguished contributors. The focus on developments in diverse Afghan localities ensures that there is much in the volume that is novel, and instructive for both specialist and general readers. I would strongly recommend that it be published, and given the exceptional topicality of its subject-matter, the sooner the better.’ — Professor William Maley, author, Rescuing Afghanistan

‘A valuable collection . . . [that] offer[s] important clues that could help to answer some of the most pressing foreign policy questions now confronting the Obama administration.’ — David Rohde, The New Republic

‘This well-researched book contains valuable insight on the command and control of the Taliban.’ — Military Review

‘Decoding the New Taliban is a serious and comprehensive collection of essays written by authorities on their subject matter that will directly benefit those who find themselves on the ground with the Afghan people and among the still evolving Neo-Taliban.’ — John Williams, Middle East Quarterly

‘Decoding the New Taliban is one of the only sources where one can find concrete, specific, and up-to-date information on the structure, strategy, and operations of the Taliban insurgents. Along with Giustozzi’s earlier book, Koran, Kalashnikov, and Laptop, Decoding the New Taliban is essential reading for anyone interested in the challenges facing the United States in bringing stability to this crucial region of the world.’ — Professor David B. Edwards, Willliams College, author of Before Taliban: Genealogies of the Afghan Jihad