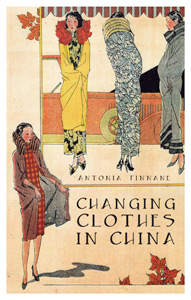 Historians have long regarded fashion as something peculiarly Western. In this surprising, sumptuously illustrated book, Antonia Finnane challenges this view, which she argues is based on nineteenth- and twentieth-century representations of Chinese dress as traditional and unchanging. Fashions, she shows, were part of Chinese life in the late imperial era, even if a fashion industry was not then apparent. In the early twentieth century the key features of modern fashion became evident, particularly in Shanghai, and rapidly changing dress styles showed the effects. The volatility of Chinese dress throughout the twentieth century matched vicissitudes in national politics. Finnane describes in detail how the close-fitting jacket and high collar of the 1911 Revolutionary period, the skirt and jacket-blouse of the May Fourth era, and the military style popular in the Cultural Revolution gave way finally to the variegated, globalized wardrobe of today. She brilliantly connects China’s modernization and global visibility with changes in dress, offering a vivid portrait of the complex, subtle, and sometimes contradictory ways the people of China have worn their nation on their backs.

‘This attractive and approachable book presents an overview of Chinese dress, both male and female, from the late imperial period to the present. … It is a significant addition to the literature and … I know of no immediate competitors with which this can be compared. Its publication is to be welcomed as a contribution to the debates about culture, modernity and gender in twentieth-century China, and, more widely, to the growing body of work on clothing and identity’. –– Verity Wilson, formerly Curator of Costume, Victoria and Albert Museum, London

‘This is the long-awaited, authoritative and definitive study of fashion in modern China, a topic if not a nascent field that has attracted recent scholarly and media attention. The author, a pioneer in this area, has accomplished an incredible feat-producing a vigorously-argued book that would advance intellectual debates while remaining accessible to the general reader. This book has a great many strengths. Previous Anglophone monographs on Chinese dress—by Vollmer, Garrett and Wilson for example—were works of collectors and museum curators. They focus on the material construction of dress and their regional or social variations at the expense of systemic cultural and economic analyses. As a result, the meaning of “fashion” as a cultural-economic phenomenon in China remains dimly understood. This is the first book-length work that situates “fashion” in historical contexts, from the world trading system and urban development to revolutionary movements in modern China. … The book will launch fashion study as a serious intellectual endeavor in the field of Chinese studies while appealing to scholars in comparative fields (fashion studies, socio-economic history, cultural history, and post-colonial studies) and the general reader alike. It would make an appropriate textbook in an advanced undergraduate class on modern Chinese history or comparative history of fashion.’ — Professor Dorothy Ko, Columbia University

Antonia Finnane is a historian of China and honorary professorial fellow at the University of Melbourne. She is currently writing a new book, How to Make a Mao Suit.