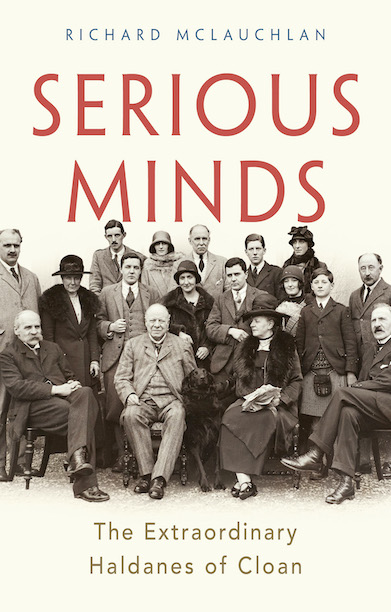 The Extraordinary Haldanes of Cloan

An elegant, revealing portrait of a remarkable family that helped to shape the politics, arts and sciences of modern Britain.

The Times hailed Richard Burdon Haldane as ‘one of the most powerful … intellects’ British statesmanship had ever seen. His brother John, a great physiologist, invented the first gas masks used in World War One. Their sister Elizabeth was among the first women to become a senior public servant. Their mother Mary, friend and advisor to top politicians and churchmen, nurtured these exceptional minds.

Mary’s grandchildren swapped her traditional roots for radical socialism, but continued the brilliant family legacy. Naomi Mitchison was a doyenne of Scottish literature; one Nobel prizewinner called her brother, the geneticist J.B.S. Haldane, ‘the cleverest man I ever knew’. Like the Darwins and Keyneses, this clan of thinkers lived in rapidly changing times, and helped to remake the world around them.

Drawing on extensive family interviews and previously unseen private papers, Serious Minds details scandal, tragedy and achievement within a dynasty that shaped modern Britain–from the welfare state, education system and military, to our understanding of energy, the human body, and the origins of life itself.

‘An engaging and uplifting account of one of Britain’s greatest intellectual dynasties.’ — Brendan Simms, Professor of the History of International Relations, University of Cambridge, and author of Britain’s Europe

‘A story that needed telling: the achievements of the extraordinary and eccentric Haldane family are woven into the past two centuries of British history.’ — Sir Roderic Lyne, former British Ambassador to Russia

‘Richard McLauchlan revives with gusto the rich connected stories of this extraordinary family. A wonderful weaving together of so many brightly coloured threads.’ — Sir Tim Hitchens, President of Wolfson College, University of Oxford

‘A great read. The female Haldanes in particular are an object lesson in what women can achieve, whatever obstacles are put in their way, yet also of how higher education transformed possibilities for women in the course of just a few generations.’ — Alison Rose, Principal of Newnham College, University of Cambridge

‘Lively, interesting, and very well researched, weaving together a tapestry of anecdote and achievement, full of life’s colour and texture.’ — Peter Mandler, Professor of Modern Cultural History, University of Cambridge

Richard McLauchlan is a Scottish writer, educated at the Universities of St Andrews and Cambridge. He collaborated with John Campbell on acclaimed biography Haldane, also published by Hurst, and has written on the Welsh poet R.S. Thomas, in Saturday's Silence. Richard co-founded the educational charity Light Up Learning.