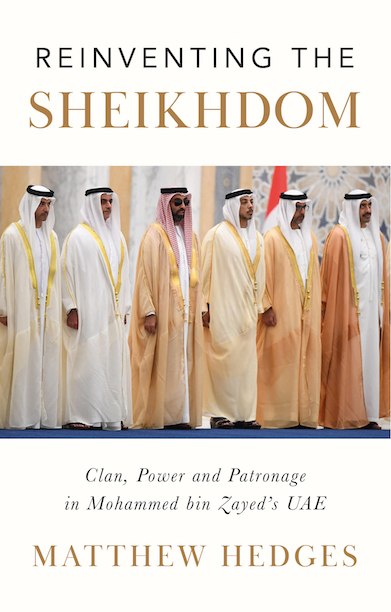 A compelling examination of how MBZ has exploited personal networks in his drive for power in the UAE.

Though the Arab Spring has reverberated through the Middle East, largely leaving a path of destruction, the relative calm in the United Arab Emirates has offered a regional roadmap for stability. Domestic changes since 2000 have significantly altered the country’s dynamics, firmly cementing power within Abu Dhabi. While Khalifa bin Zayed succeeded his father as emir of Abu Dhabi and UAE president in 2004, the Emirates’ evolution has largely been accredited to Abu Dhabi’s crown prince, Mohammed bin Zayed. His reign has been characterised by the rise of the security apparatus and a micromanaged approach to governance.

Mohammed bin Zayed’s strategy of fortification has focused on pre-empting threats from the UAE’s native population, rather than from expatriates or foreign actors. As a result, he has consolidated power, distributing its administration among his tribal and kinship allies. In essence, Mohammed bin Zayed has driven modernisation in order to strengthen his grasp on power.

This book explores Mohammed bin Zayed’s regime security strategy, illustrating the network of alliances that seek to support his reign and that of his family. In an ever-turbulent region, the UAE remains critical to understanding the evolution of Middle Eastern authoritarian control.

Listen to Matthew Hedges on The Bunker Daily podcast:

‘A theoretically nuanced and empirically rich book, telling the troubling story of the expansion of Emirati security operations after the Arab Spring. A must-read for anyone concerned with how far regimes can penetrate every aspect of citizens’ lives in the name of security.’ — Madawi Al-Rasheed, Visiting Professor at the Middle East Centre, LSE,
Fellow of the British Academy, and author of The Son King: Reform and Repression in Saudi Arabia

‘The regime’s mechanisms for staying in power are a much-understudied topic. Rich in interesting empirical data, this book is an important, and in many ways unique, contribution to the academic literature on the UAE.’ — Stig Stenslie, Professor at the Centre for Intelligence Studies, Norwegian Defence Intelligence School, and co-author of Stability and Change in the Modern Middle East

‘In this ground-breaking new study, Matthew Hedges explores the development of the UAE as a security-state without regional compare, one that while claiming to secure the nation, has served to entrench the power of Abu Dhabi over the Federation.’ — Clive Jones, Professor of Regional Security, Durham University, and author of Fraternal Enemies: Israel and the Gulf Monarchies

Matthew Hedges is an academic focusing on authoritarian regimes, with an emphasis on the monarchies of the Arabian Peninsula. While conducting fieldwork research for his PhD in the UAE, he was arrested and sentenced to life imprisonment under the charge of espionage. He was awarded his doctorate by Durham University.