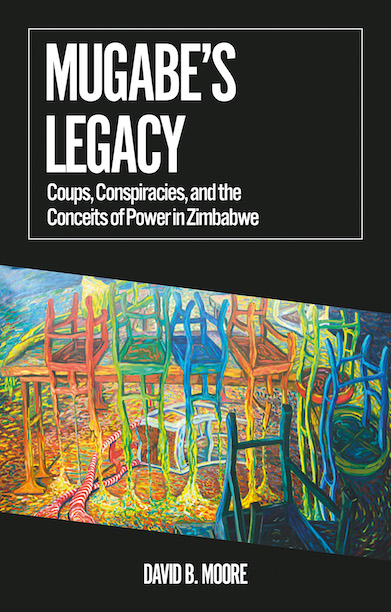 Coups, Conspiracies, and the Conceits of Power in Zimbabwe

An authoritative account of Mugabe’s destructive hold on power, assessing the challenges facing Zimbabwe as it seeks to emerge from the chaos.

Zimbabwe’s party-internal ‘coup’ of 2017, and deposed president Robert Mugabe’s death nearly two years later, demand careful, historically nuanced explanation. How did Mugabe gain and retain power over party and state for four decades? Did the suspected and nearly real ‘coups’, the conspiracies behind them, and their concurrent mythomaniacal conceits ultimately, ironically, spell his near-tragic end? Has Mugabe’s particular mode of power reached a finality with his own downfall, as his successors struggle more to balance Zimbabwe’s political contradictions? Will the phalanxes arrayed against Mugabe’s control fray further, as Zimbabwe fades?

Mugabe’s Legacy delves deeply into such questions, drawing on more than forty years of archival and interview-based research on Zimbabwe’s political history and current precariousness. Starting with the mid-1970s, it traces how Machiavellian moves allowed Mugabe to reach the apex of the Zimbabwe African National Union’s already slippery slopes, through the complexities of Cold War, regional, ideological, generational, inter- and intra-party tensions. The lessons learned by the president and the nascent ruling party then turned gradually inward, ultimately arriving at a near-collapse that may now pervade all of the country’s political space. David B. Moore vividly charts this rise and fall, all the way to Zimbabwe’s tenuous chaos today.

‘Moore’s deft and dramatic political history of Mugabe’s rise and humiliating fall unpacks a tragic and continuing Animal Farm legacy. Comprehensive in its treatment of Zimbabwe’s major political events and actors, this is an intriguing and timely read.’ — NoViolet Bulawayo, Zimbabwean novelist

‘Mugabe’s Legacy is sharp, erudite, often funny, and full of unexpected and unusual critical insights. I enjoyed reading it.’ — Joost Fontein, Professor of Anthropology, University of Johannesburg, and co-editor of Legacies of Struggle in Southern & Eastern Africa

‘By far the best account I’ve ever read of the processes and events in and around Zimbabwe over the past 40 years. A most formidable work of scholarship and a sordid and sorry tale. This is Moore at the top of his game!’ — Ian Phimister, Senior Research Professor, University of the Free State, South Africa

‘An entertaining and rewarding read, combining personal memoir, rigorous scholarship, and an irreverent style. Moore links the generational struggles behind the military’s overthrow of Mugabe to his violent purge of radical, younger challengers during the liberation war.’ — Norma J. Kriger, author of Zimbabwe’s Guerrilla War

‘What was the impact of Mugabe’s life and death? Moore’s answer is a fascinating journey through power, using Gramsci to give us an original reading of how it was conquered and how rule was exercised in Zimbabwe. A must-read!’ — Isabella Soi, Department of Social and Political Science, University of Cagliari

‘Insightful, impressively knowledgeable and masterfully presented, this analysis of decades of Mugabe’s manipulative leadership and his legacy is a must-read for anyone who wishes to understand the forces that have shaped ZANU-PF’s turbulent history and Zimbabwe’s current crisis.’ — Alois Mlambo, Emeritus Professor of History and Heritage, University of Pretoria, and co-author of A History of Southern Africa

‘A fascinating narrative addressing long-term questions on primitive accumulation, nation-building and democratisation, and interrogating the history of nationalist politics. Drawing on archival diplomatic sources, interviews, anecdotes and rumour, this is a compelling, radical critique, with an aura of magical realism.’ — Brian Raftopoulos, scholar, activist and co-author of Becoming Zimbabwe

David B. Moore is a professor of Development Studies at the University of Johannesburg, who has been researching and writing on Zimbabwe’s political history and political economy since the early 1980s. He has also pursued Marxist and Gramscian theories of development discourse and the political economy of Africa.