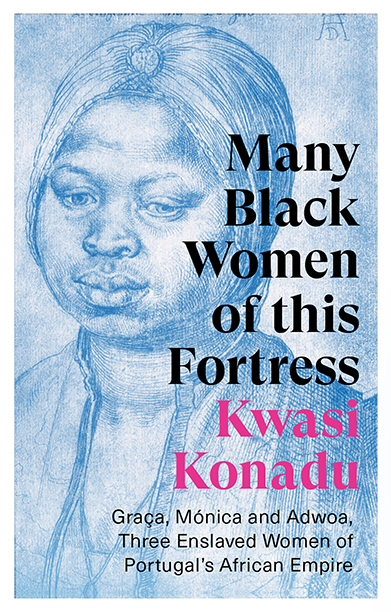 Many Black Women of this Fortress

A haunting triple biography of women whose lives were indelibly shaped by slavery, race and the Inquisition.

This book presents rare evidence about the lives of three African women in the sixteenth century—the very period from which we can trace the origins of global empires, slavery, capitalism, modern religious dogma and anti-Black violence. These features of today’s world took shape as Portugal built a global empire on African gold and bodies. Forced labour was essential to the world economy of the Atlantic basin, and afflicted many African women and girls who were enslaved and manumitted, baptised and unconvinced.

While some women liaised with European and mixed-race men along the West African coast, others, ordinary yet bold, pushed back against new forms of captivity, racial capitalism, religious orthodoxy and sexual violence, as if they were already self-governing. Many Black Women of this Fortress lays bare the insurgent ideas and actions of Graça, Mónica and Adwoa, charting how they advocated for themselves and exercised spiritual and female power. Theirs is a collective story, written from obscurity; from the forgotten and overlooked colonial records. By drawing attention to their lives, we dare to grasp the complexities of modernity’s gestation.

‘This remarkable book recovers from the Portuguese archives the life histories of three women who lived in the fifteenth and sixteenth centuries in present-day Ghana. Konadu, an outstanding historian of his generation, presents a lucid, riveting and transformative portrait of gender and politics in the face of the violence of European empires at the dawn of modernity.’ — Toby Green, Professor of Precolonial and Lusophone African History and Culture, King’s College London

‘A fascinating picture of the entangled early modern world. Using the rich archival material found in inquisition records, this book provides an important new window onto the daily lives of three Black women in sixteenth-century coastal West Africa, and in Europe.’ — Bronwen Everill, Lecturer in History, University of Cambridge

‘A refreshing, remarkable excavation of the kind of life stories typically lost to history. Methodologically creative and bold in reach, this is a book that forces us to rethink both what we know and what we are able to know.’ — Paddy Docherty, author of Blood and Bronze

Kwasi Konadu is John D. and Catherine T. MacArthur Endowed Chair and Professor at Colgate University, teaching worldwide African histories and cultures. He is the author of Our Own Way in This Part of the World: Biography of an African Community, Culture, and Nation; and co-editor of The Ghana Reader.