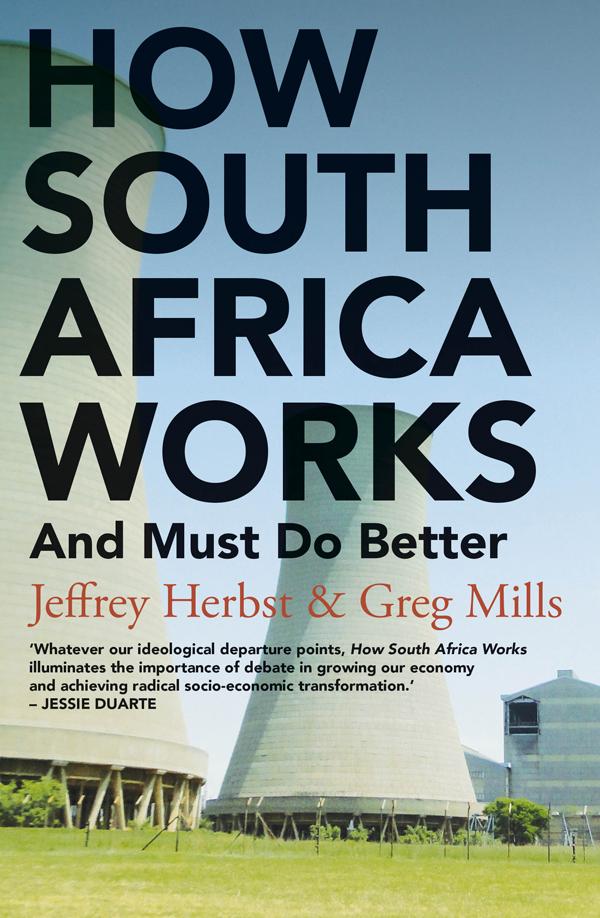 And Must Do Better

Is South Africa heading for the rocks? No, argue Mills and Herbst. Their book explains how great strides are being made, especially economically, counter to the rhetoric of disappointment which dominates public debate in the ‘Rainbow Nation’

The overwhelming challenge that South Africa faces, and has to date failed to address, is unemployment, which falls especially on African youths who were promised a better future after 1994. If the current unemployment challenge is not addressed, it will be impossible to sustainably lift many millions of people out of poverty.

How South Africa Works reviews the country’s major economic achievements over the past two decades. Through numerous interviews with politicians, business leaders and analysts, it examines the challenges and opportunities across key productive sectors — including agriculture, manufacturing, services, and mining — illustrative of the policy challenges that leaders face. It scrutinises the social grant and education systems to understand if South Africa has established mechanisms for people not only to escape destitution but also to prepare for employment, and identifies steps that some of South Africa’s most notable entrepreneurs have taken to build world-class enterprises. Recognising the essential challenge to cultivate more employers to employ people, How South Africa Works concludes by offering an agenda and active steps for greater competitiveness for government, business and labour.

‘Are the economic imperatives for employment and growth reconcilable with those for transformation and redress? What are the tough choices confronting a developing economy to lift itself out of poverty into a globally competitive player? Read more from Herbst and Mills to find out the answers.’ — Sipho Pityana, Chairperson, AngloGold Ashanti

‘South Africa 20 years after transition is a complex and multidimensional country. Competing alliances and juxtapositions have changed the dynamics of the “new South Africa”. How South Africa Works helps to understand the evolving paradigm and provides potential solutions. It is a welcome and unemotional addition to the debate – a worthwhile read!’ — Gareth Ackerman, Chairperson, Pick n Pay

‘As we enter the third decade of our democracy, the disjuncture between South Africa’s potential and its performance has never been as stark. How South Africa Works is an urgent call to all South African leaders to revisit yesterday’s assumptions and to abandon the politics, policies and practices that are stifling growth and with it, for millions, the hope of a better tomorrow.’ — Mark Lamberti, Group CEO, Imperial Holdings Limited

‘South Africa is a complicated place. Held back by its history, it is challenged to break out of a motionless present to build a brighter future for the generation still to be born. This is an enormous task that all South Africans must debate and embrace. How South Africa Works is a courageous and timely contribution to that debate and needed course of action.’ — Moe Shaik, Development Bank of South Africa

‘The great strength of this book is that the analysis is supported by a wealth of in-depth interviews: Herbst and Mills illustrate how South Africa could work so much better if its considerable human potential were to be liberated by economic reform.’ — Mike Spicer, Wesgro

‘Jeffrey Herbst and Greg Mills present intriguing findings about how South African businesses are squaring up to local and global challenges, putting a vivid, human face to South African entrepreneurship. Their proposals provoke much-needed debate on how to improve South Africa’s economic performance.’ — Kenneth Creamer, economist, University of the Witwatersrand

‘Jeffrey Herbst and Greg Mills have written an exceptionally timely book. Notwithstanding the country’s significant political and economic advances, high rates of unemployment threaten those gains and, indeed, the freshly woven social fabric of the “Rainbow Nation” itself. The volume meticulously examines this crisis and thoughtfully engages virtually everyone in a position to either contribute to its resolution, or obstruct that progress. Even those who will find themselves disagreeing with the remedies prescribed in How South Africa Works will nevertheless need to grapple with the comprehensive case made by the authors.’ — J. Peter Pham, Director, Africa Center, Atlantic Council, and Editor-in- Chief, Journal of the Middle East and Africa

‘A brilliant book that lays out the problems and solutions for the South African economy with clarity.’ — Ray Hartley, Editor, Rand Daily Mail

‘Jeffrey Herbst and Greg Mills succinctly argue in How South Africa Works that economic decline is not inevitable and that South Africa can compete on the world stage. This book is a must-read for those concerned about South Africa’s economic future and how it may develop.’ — Alex Vines OBE, Head, Africa Programme, Chatham House, London

Jeffrey Herbst is President of the American Jewish University, Los Angeles. A political scientist, Professor Herbst taught at Princeton University for eighteen years and is the author of States and Power in Africa: Comparative Lessons in Authority and Control and many other books and articles. A member of the Council on Foreign Relations, and the Board of Freedom House, he has served on the advisory board of The Brenthurst Foundation since 2005.