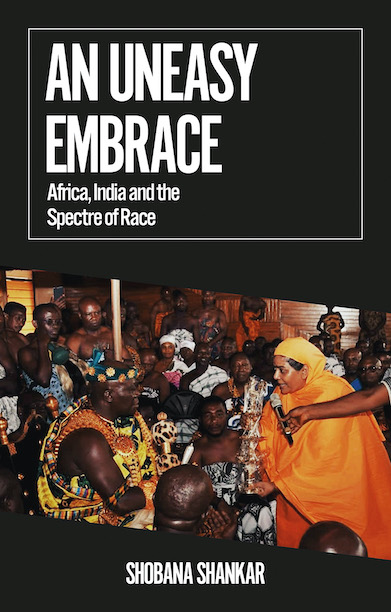 Africa, India and the Spectre of Race

A pioneering cultural and intellectual history of how race and racialisation have brought Africans and Indians together, yet also driven them apart.

The entwined histories of Blacks and Indians defy easy explanation. From Ghanaian protests over Gandhi statues to American Vice President Kamala Harris’s story, this relationship—notwithstanding moments of common struggle—seethes with conflicts that reveal how race reverberates throughout the modern world.

Shobana Shankar’s groundbreaking intellectual history tackles the controversial question of how Africans and Indians make and unmake their differences. Drawing on archival and oral sources from seven countries, she traces how economic tensions surrounding the Indian diaspora in East and Southern Africa collided with widening Indian networks in West Africa and the Black Atlantic, forcing a racial reckoning over the course of the twentieth century. While decolonisation brought Africans and Indians together to challenge Euro-American white supremacy, discord over caste, religion, sex and skin colour simmered beneath the rhetoric of Afro-Asian solidarity.

This book examines the cultural movements, including Pan-Africanism and popular devotionalism, through which Africans and Indians made race consciousness, alongside economic cooperation, a moral priority. Yet rising wealth and nationalist amnesia now threaten this postcolonial ethos. Calls to dismantle statues, from Dakar to Delhi, are not mere symbolism. They express new solidarities which seek to salvage dissenting histories and to preserve the possibility of alternative futures.

‘Shobana Shankar is a first-rate academic and this book makes an important contribution to the growing literature on the Indian Ocean world. Thought-provoking, properly researched and well written, An Uneasy Embrace pushes the academic boundaries.’ — Goolam Vahed, Professor of History, University of KwaZulu Natal, and author of History of the Present: A Biography of Indian South Africans, 1994–2019

‘An Uneasy Embrace is an ingenious narrative and a meticulously researched account of the unexplored cultural, political and racial conversations between Indians and West Africans. Unique in its interdisciplinary methodology and subject matter, it will have an appeal across disciplines.’ — Renu Modi, Professor and Director, Centre for African Studies, University of Mumbai

‘This brave book is a welcome addition to the growing intellectual exploration of race–caste theories. Original in scope and informed by passionate research, it will become one of the most sought-after works on African–Indian studies.’ — Suraj Yengde, Harvard University, author of Caste Matters

Shobana Shankar is Associate Professor of History at Stony Brook University. She is the author of Who Shall Enter Paradise? Christian Origins in Muslim Northern Nigeria, c. 1890–1975; and co-editor of Religions on the Move! and Transforming Africa’s Religious Landscapes: The Sudan Interior Mission (SIM), Past and Present.