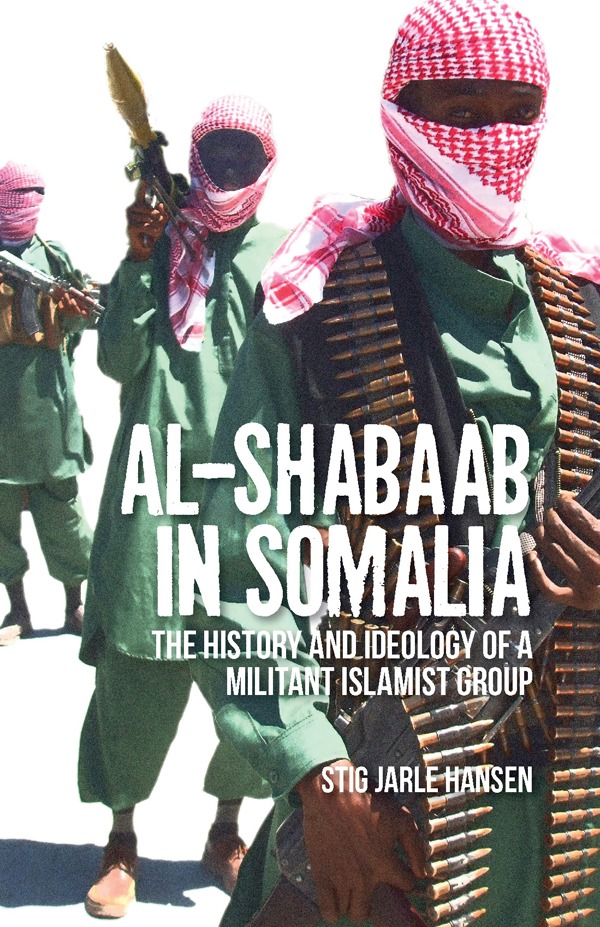 The History and Ideology of a Militant Islamist Group

Part of the Somali Society, History and Politics series

A remarkable book based on intensive field research as well as on the ground interviews with Shabaab leaders.

Since early 2007 a new breed of combatants has appeared on the streets of Mogadishu and other towns in Somalia: the ‘Shabaab’, or youth, the only self-proclaimed branch of al-Qaeda to have gained acceptance (and praise) from Ayman al-Zawahiri and ‘AQ centre’ in Afghanistan. Itself an offshoot of the Islamic Courts Union, which split in 2006, Al-Shabaab has imposed Sharia law and is also heavily influenced by local clan structures within Somalia itself. It remains an infamous and widely discussed, yet little-researched and understood, Islamist group. Hansen’s remarkable book attempts to go beyond the media headlines and simplistic analyses based on alarmist or localist narratives and, by employing intensive field research conducted within Somalia, as well as on the ground interviews with Al-Shabaab leaders themselves, explores the history of a remarkable organisation, one that has survived predictions of its collapse on several occasions. Hansen portrays Al-Shabaab as a hybrid Islamist organisation that combines a strong streak of Somali nationalism with the rhetorical obligations of international jihadism, thereby attracting a not insignificant number of foreign fighters to its ranks. Both these strands of Al-Shabaab have been inadvertently boosted by Ethiopian, American and African Union attempts to defeat it militarily, all of which have come to nought.

‘Essential reading … Hansen focuses on the complex ideological detours and military tactics of the Shabab from its inception … a succinct and definitive history.’ — The Economist

‘Al-Shabaab in Somalia is a judicious and timely study of a poorly understood militant Islamist group. A brave attempt to both historicize and scrutinize Al-Shabaab, it is a must-read for anyone wishing to understand a group that has unleashed havoc in parts of Africa.’ — African Affairs

‘An intimidatingly impressive book. No one else has amassed this level of detail and matched it with analysis. … Stig Jarle Hansen knows more about the positions, decompositions and recompositions of Al-Shabaab than any Western scholar. This book is a real service to us all.’ – Stephen Chan, SOAS, University of London, The Round Table: The Commonwealth Journal of International Studies

‘If you want to understand the reality of the Al-Shabaab phenomenon in Somalia, its existence in the country and its grounding in that ravaged land, this short book, written by a researcher who actually engaged in person with his research topic, will provide you with more concrete nourishment than a whole raft of official reports.’ — Gérard Prunier, author of From Genocide to Continental War: The ‘Congolese’ Conflict and the Crisis of Contemporary Africa

‪‘Unlike the legion of ivory-tower academics, armchair analysts, and self-promoting pundits who have expatiated about Al-Shabaab without even having set foot anywhere near Somalia, much less ever encountering an adherent of the group, Stig Jarle Hansen is a charter member of the small band of intrepid scholars who, even at the height of the insurgency, still pursued their research in the country, their work consistently informed by direct knowledge of actors and events. His is a comprehensive and accessible treatment of a significant subject. Highly recommended.’ — J. Peter Pham, Director, Michael S. Ansari Africa Center, Atlantic Council, and Editor-in-Chief, The Journal of the Middle East and Africa‬

‘This disturbing but fascinating book not only documents the rise of one of the most dangerous of al-Qaeda’s affiliates but also explains its central importance to Somali politics.  Hansen is a skilful writer whose long experience of Somali life allows him to enter into the thinking of one of the world’s most dangerous fundamentalist groups.’ — Christopher Coker, Professor of International Relations, London School of Economics, and author of Warrior Geeks: How 21st Century Technology is Changing the Way We Fight and Think About War

‘So far, no book-length treatment of Al-Shabaab exists in the academic literature, and due to the political and military importance of the group in Somalia and the wider Horn of Africa, policymakers and development workers, as well as area specialists, are in urgent need of such a detailed account.’ –– Markus Hoehne, Max Planck Institute for Social Anthropology

‘Stig Jarle Hansen has written what is undoubtedly the best book on Al-Shabaab […] Predictions of Al-Shabaab’s collapse have occurred frequently since 2008 but, despite notable set-backs, it has survived […] Hansen’s book is an essential tool for those wishing to understand what the future might hold.’ — Magnus Taylor, African Arguments

‘Hansen has travelled widely through Somalia for years and is personally familiar with many of the members and leaders of the movement. As a result, his description of events carries a powerful sense of legitimacy… [He] has put together a remarkably a remarkably detailed account of al-Shabaab’s history … [and] until the distant and unlikely day when something better comes along, Al-Shabaab in Somalia is the definitive book on the subject.’ — Richard J. Norton, Parameters, The US Army War College Quarterly