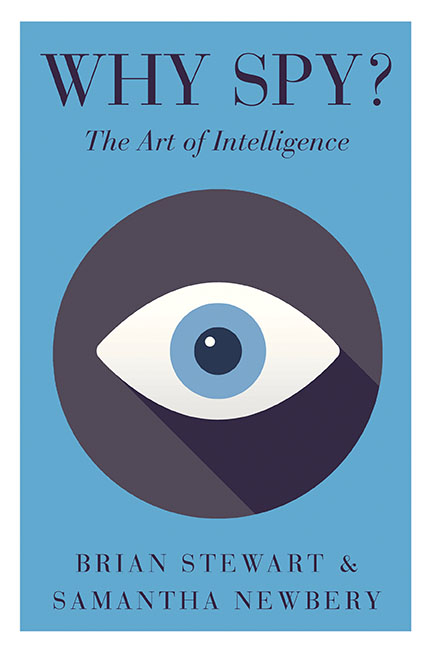 The Art of Intelligence

Part of the Intelligence and Security series

‘Fascinating … Why Spy?’s four parts are divided into 13 short chapters, which are in fact concise essays on all aspects of spying. The chapters on types of intelligence, how intelligence is (or should be) assessed and deception operations are riveting, full of illuminating detail.’ — The Scotsman

Why Spy? distills Brian Stewart’s seventy years of experience in intelligence. Few books currently available have been written by someone who has his practical experience both of field work and of the intelligence bureaucracy at home and abroad. Stewart relates successes and failures via a fascinating series of vignettes, either those cases in which he was personally involved, or seminal events such as the Japanese attack on Pearl Harbor, and draws conclusions that should be pondered by all those concerned with the limitations and usefulness of the intelligence product.

Stewart also cautions against the tendency to abuse or ignore intelligence findings when their conclusions do not fit with preconceived ideas. He reminds the reader of the multiplicity of methods and organisations and the wide range of talents making up the intelligence world.

The emphasis throughout Why Spy? is on the necessity of embracing a range of sources, including police, political, military and overt, to ensure that secret intelligence is placed in as wide a context as possible when decisions are made.

‘Stewart [argues] from deep experience with intelligence in the Malayan crisis, service as a diplomat in Hanoi, as secretary to the Joint Intelligence Committee, and long experience in China. [His book is] elegantly written and a delight to read.’ — The World Today

‘Why Spy? is a great introduction to the intelligence field, especially for American consumers of intelligence: the policy-maker and the military decision-maker.’ — Parameters (US Army War College)

‘Brian Stewart’s book is an educative one. … Helpfully demystifying, the book is written in clear and frank language: it cuts through the circumlocutions of officialese.’ —  Literary Review

‘Drawing on a lifetime of personal experience and wisdom Brian Stewart, together with his co-author Samantha Newbury, explains why nations engage in espionage and how intelligence can impact on policy-making for good or ill. The authors do not shy away from addressing the more controversial aspects of intelligence work but make a convincing case that in this arena issues cannot be seen in black or white terms. This book, written with a deceptively light touch, is an important contribution to the field of intelligence studies.’ — Nigel Inkster, Director of Transnational Threats and Political Risk, IISS, and former Director of Operations and Intelligence for the British Secret Intelligence Service

‘It is most unusual for a seasoned British official to write a book about intelligence. Brian Stewart, in this most remarkable and fascinating account, describes some of his experiences whilst reflecting on the deeper meaning of intelligence. His co-writer, Samantha Newbury, has added a wealth of secondary references to ensure that this is a book for the academic, the aficionado, and the spy.’ — Michael Goodman, Reader in Intelligence and International Affairs, Department of War Studies, King’s College, London and Official Historian of the Joint Intelligence Committee

‘Brian Stewart’s musings on his long career in intelligence-related work—ably aided by the researcher Samantha Newbery—have the aroma of a good whisky, well-distilled. … Stewart takes a historical and philosophical perspective, rightly emphasising that “good assessment is the key to good intelligence” and regretfully observing that “it has been well said that customers sometimes use intelligence as a drunk uses a lamp post: for support, not illumination”. … His book reads like an extended ambassadorial valedictory, as they used to be—and is all the better for it.’ — The Spectator

Brian Stewart, MC, CMG, went from Oxford into the Black Watch and studied Chinese during the pre-Communist turmoil. His career in the Malayan Civil Service and during later postings in Asia, including in Hanoi during the Vietnam War, was frequently concerned with intelligence in the field and his subsequent position as Secretary of the Joint Intelligence Committee in the Cabinet Office gave him a bird’s eye view of the intelligence bureaucracy both in Britain and the United States. He continued to work in Asia, mostly in China, after leaving government service and to follow developments in the intelligence world with a critical eye.