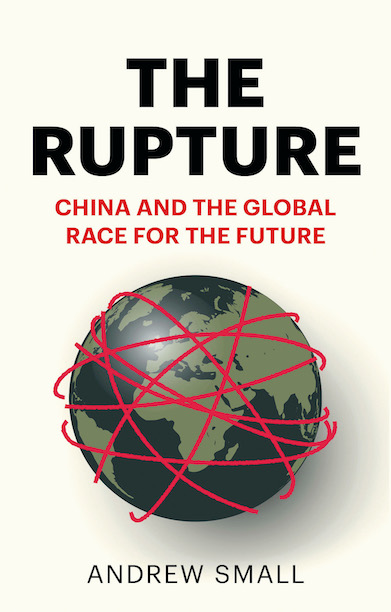 China and the Global Race for the Future

The gripping story of a turning point in global affairs, as politicians belatedly awaken to serious systemic threats.

This is the inside story of a revolution in China policy, from Washington to Brussels, Berlin to New Delhi. The Rupture explains how many of the Western politicians, thinkers and business leaders closest to Beijing have become its sharpest opponents; how the COVID-19 pandemic dramatically accelerated this collective rethink; and why 5G represents the first test case as to whether China may win the battle for the future.

Noted China expert Andrew Small offers a kaleidoscopic picture of a rivalry ranging far beyond ‘great power’ politics. He traces US efforts to recast relations with old allies, as Washington realises that it cannot confront China alone, charting Europe’s growing role in the technological and economic contest, and Beijing’s attempts to build a coalition of its own, from Moscow to Taliban-run Kabul.

‘A compelling, first-person perspective on the West’s awakening to the systemic challenges posed by China.’ — Newsweek

‘Detailed and clear-sighted. A valuable report on a consequential global rivalry.’ — Publishers Weekly

‘Ably traces how China went from partner to rival to threat and maps out the challenges that it now poses for the West.’ — Kirkus Reviews

‘Anyone who wants to understand the rethinking of China policy that has taken place in recent years, and Beijing’s challenge to Germany and to Europe, must read this smart and compelling account by one of the best-informed insiders.’ — International Politik,‘Books of the Year’

‘The most important book about China written in the past decade. A gripping narrative of great poignancy; a must-read for anyone trying to make sense of the biggest story of our times.’ — Mark Leonard, co-founder and director of the European Council on Foreign Relations

‘Thanks to his extensive involvement in Europe’s interaction with China, Small’s account provides a degree of immediacy and detail lacking in most books on the subject. A sobering story of how a well-intentioned and initially promising European effort of engagement ended in bitter disappointment for both sides.’ — Minxin Pei, Tom and Margot Pritzker ’72 Professor of Government, Claremont McKenna College, and author of China’s Crony Capitalism

‘Over the past decade, democracies have started to recognise the economic, technological and ideological challenges posed by China to their prosperity and security. Small is uniquely well positioned to tell the story of this still-incomplete awakening. Essential reading.’ — Aaron L. Friedberg, Professor of Politics and International Affairs, Princeton University, and author of Getting China Wrong

‘In incisive analysis, this fills gaps in our understanding of the sources of China’s conduct and of the multiple considerations that determine European actions towards China.’ — Shivshankar Menon, India’s former National Security Adviser, Foreign Secretary and Ambassador to China

Andrew Small is a senior transatlantic fellow with the German Marshall Fund's Asia Program, which he established in 2006. The author of The China-Pakistan Axis (also published by Hurst), he lives in Berlin.