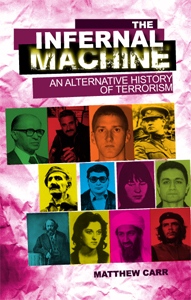 An Alternative History of Terrorism

‘This is an excellent, fascinating history that demystifies much of what we think we know about terrorism.’ –– Frank Furedi

Political violence has become the scourge of our world and terrorism is routinely described as a uniquely modern evil. Yet however unprecedented in scope the new terrorist organisations might appear, Matthew Carr argues in this definitive history of terrorism that they are merely offshoots of a spectacular bombing in 1881: the assassination of Tsar Alexander II by terrorists . . . or were they freedom fighters? Thus begins a narrative of extraordinary sweep that Publishers Weekly called ‘engrossing, unsettling’ and the Boston Globe praised as ‘brave and wise’ and ‘a book for the ages.’ In The Infernal Machine, Carr unearths the complex realities of terrorist violence and its indelible impact on nations as different as Italy, Argentina, France, Algeria, Ireland, Russia, Japan, and the United States. Spanning over a century of world history, The Infernal Machine reveals stunning similarities in societies’ responses to terrorism despite profound political and cultural differences. Carr demonstrates again and again that the true impact of terrorism has been felt in the overreactions of government and the media to acts of political violence. This encyclopedic and diagnostic primer for our frightening times allows us to see our current predicament against a background of striking historical parallels.

‘Carr’s central point is that politicians’ responses go beyond all sensible assessment of risk and do half the terrorist’s job for him. … I am with Carr in believing that the chief risk today is not of Muslim terrorists undermining western democracy but of the West doing so itself by absurdly overstating that risk.’ — Simon Jenkins, Sunday Times

‘Carr has a twofold mission. To establish the humanity and sanity of men and women whom governmental and media maledictions have routinely caricatured as evil monsters, and to expose the atrocities and injustices that are perpetrated under the guise of counter-terrorism.’ — Michael Burleigh, Sunday Telegraph

‘The professional “terrorologists” should tremble at the publication of this brilliant book which so deftly dismantles the bogus pretenses and false analogies with which they sanctify the global war on civil liberties and free speech. The Satanic face of Terror, as Carr demonstrates with vivid historical case-studies, is usually the State looking at itself in a mirror.’ — Mike Davis, author of Buda’s Wagon: A Brief History of the Car Bomb

‘Matthew Carr has written a brilliant book. The Infernal Machine brims with insight. Here, finally, we are able to see modern terrorism in its proper context’. — Professor Andrew J. Bacevich, author, The New American Militarism: How Americans are Seduced by War

‘Carr makes about as much sense of terrorism, in its historic and current permutations, as any author is likely to do.’ — The Boston Globe

‘Profound in its thinking and ramifications.’ — Sunday Herald