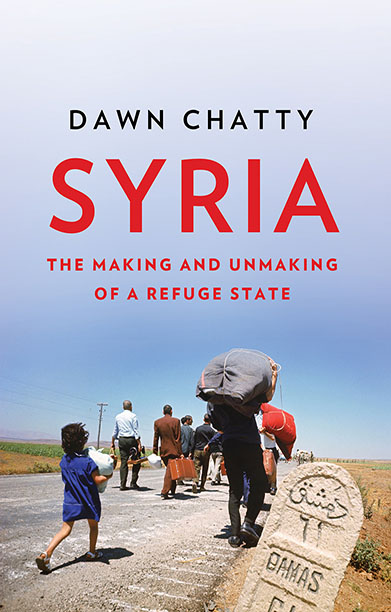 The Making and Unmaking of a Refuge State

The dispossession and forced migration of nearly 50 per cent of Syria’s population has produced the greatest refugee crisis since World War II. This new book places the current displacement within the context of the widespread migrations that have indelibly marked the region throughout the last 150 years. Syria itself has harboured millions from its neighbouring lands, and Syrian society has been shaped by these diasporas.

Dawn Chatty explores how modern Syria came to be a refuge state, focusing first on the major forced migrations into Syria of Circassians, Armenians, Kurds, Palestinians, and Iraqis. Drawing heavily on individual narratives and stories of integration, adaptation, and compromise, she shows that a local cosmopolitanism came to be seen as intrinsic to Syrian society. She examines the current outflow of people from Syria to neighbouring states as individuals and families seek survival with dignity, arguing that though the future remains uncertain, the resilience and strength of Syrian society both displaced internally within Syria and externally across borders bodes well for successful return and reintegration.

If there is any hope to be found in the Syrian civil war, it is in this history.

‘[Chatty’s] book examines the country’s experience with migration through a mixture of source material and interviews with members of minority communities. A portrait emerges of a country that has been tolerant and generous to those seeking refuge.’— The Financial Times

‘Fascinating . . . Chatty’s work provides a valuable insight into Syria’s formation as a refugee state before it became the world’s biggest exporter of refugees.’— International Affairs

‘An admirably clear exposition of how and why Syria embraced millions of Muslim and Christian refugees from the disintegrating Ottoman Empire and how and why, in the current war, displaced Syrians were met with reciprocal hospitality in Turkey, Lebanon and Jordan, but large-scale rejection in the West.’ — Diana Darke, author of My House in Damascus: An Inside View of the Syria Crisis

‘Passionate and erudite, combining the intimacy of the anthropological eye with a broad historical sweep, Dawn Chatty tells the two-century story of Syria as a place of refuge. Beginning with Sultan Abdul Hamid’s creation of the muhajireen quarter of Damascus as a refuge for Muslims from Crete, Chatty further exposes the often-forgotten forced migrations of Muslims from the Balkans, Crimea, and the Caucasus; the story continues with the Armenians, Kurds, then the Palestinians and Iraqis. The last chapter recounts the tragedy of how Syrians have now become refugees from their own country.’ —  Raymond Hinnebusch, Professor, School of International Relations, University of St Andrews

‘A very timely and insightful book. Tracing the arc of migration in and out of Syria in the last 150 years, Dawn Chatty offers a layered portrait of a modern nation whose cultural hybridity was until recently the source of its openness.’ — Nasser Rabat, Aga Khan Professor, Massachusetts Institute of Technology

‘Today half of the Syrian population is internally displaced or have fled, or left, for mainly neighbouring countries but also further afield. In this crisis we risk disregarding the rich humanitarian history of the country. Dawn Chatty’s timely book is devoted to that history when Bilad ash-Sham in the late Ottoman period, and Syria since World War I, received and welcomed refugees and uprooted people from within, as well as from without, the region. Based on long-term anthropological engagement in the region and with the people she writes about, this book is a very important contribution to regional ethnography and history and to the development of refugee studies.’ — Annika Rabo, Professor of Social Anthropology, Stockholm University

Dawn Chatty is Emerita Professor of Anthropology and Forced Migration and the former director of the Refugee Studies Centre at the Department of International Development,  University of Oxford. She is the author of Displacement and Dispossession in the Modern Middle East and From Camel to Truck.