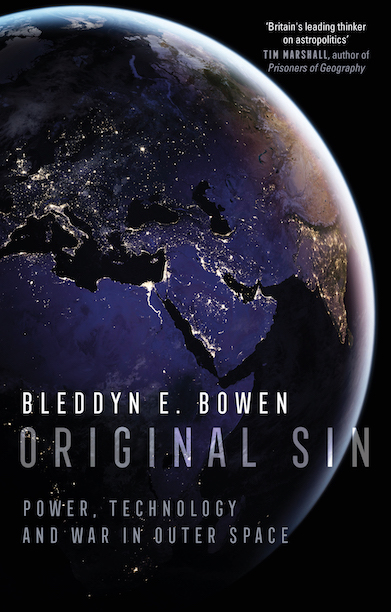 An eye-opening account of a world order shaped by spacepower and the threat of space warfare.

‘Every page of this book is suffused with unrivalled knowledge of space technology and its implications for international relations.’ — Morning Star

‘[Bowen] offers a robust framework for understanding the politics of security on orbit …. [Original Sin is] a timely and welcome contribution to our understanding of space, politics, and security in the modern era.’ — Diplomatic Courier

‘A work from Britain’s leading thinker on astropolitics… Dr Bowen strips away any pretence that space is not already a war-fighting domain.’ — Tim Marshall, bestselling author of The Power of Geography and Prisoners of Geography

‘The perspective on space Bowen brings is meant to–and does–challenge the reader. There is much of value here to chew on, and any serious space power student or practitioner needs to pay careful attention to his arguments.’ — Everett Dolman, Professor of Comparative Military Studies and Strategy, US Air Force’s Air Command and Staff College, and author of Astropolitik

‘This book sets out to describe how the militarisation of space is not a new policy issue or trend in world politics, but a long-established historical fact and present reality. Original and compelling, this will be of interest to anyone seeking a history of technology’s role in space strategy.’ — John J. Klein, author of Understanding Space Strategy

‘A fresh, timely and detailed account of the military-political origins of spacepower and the future of warfare in space.’ — Deganit Paikowsky, author of The Power of the Space Club

‘Bowen persuasively demonstrates that space technology is the outcome of war, and driven by military applications. By exposing the hidden face of space, this book makes a critical intervention towards a peaceful world.’ — Alice Gorman, author of Dr Space Junk vs the Universe

‘Original Sin makes the valid argument that, far from us existing in a new “space race”, the history of space exploration has always been about power, politics, political economy and the pursuit of national interests on the global stage. A satisfying and insightful read from a deeply knowledgeable expert.’ — Tim Stevens, Senior Lecturer in Global Security and head of the King’s Cyber Security Research Group, King’s College London

Bleddyn E. Bowen is Associate Professor of International Relations at the University of Leicester, specialising in space policy and military uses of outer space. The internationally recognised author of War in Space, he consults on space policy for institutions including the UK Parliament, the European Space Agency, and the Pentagon.