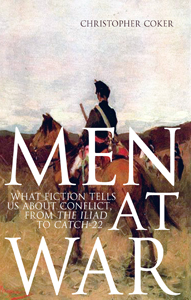 What Fiction Tells us About Conflict, From the Iliad to Catch-22

‘…a fascinating study … War still provides the most potent myths, and writers continue to be fascinated by it, just as they are by war’s effect on the individual. In just 300 pages, Christopher Coker provides an unusually rewarding feast of perceptive analysis.’ — Antony Beevor, The Telegaph

Since Achilles first stormed into our imagination, literature has introduced its readers to truly unforgettable martial characters. In Men at War Christopher Coker discusses some of the most famous of these fictional creations and their impact on our understanding of war and masculinity. Grouped into five archetypes—warriors, heroes, villains, survivors and victims—these characters range across 3000 years of history, through epic poems, the modern novel and one of the twentieth century’s most famous film scripts.

Great authors like Homer and Tolstoy reveal to us aspects of reality invisible except through a literary lens, while fictional characters such as Achilles, Falstaff, Robert Jordan and Jack Aubrey are not just larger than life, they are life’s largeness; and this is why we seek them out. Although the Greeks knew that the lovers, wives and mothers of soldiers are the chief victims of battle, for combatants war is a masculine pursuit. Each of Coker’s chapters explores what fiction tells us about war’s hold on the imagination of young men and the way it makes—and breaks—them. War’s existential appeal is also perhaps best conveyed in fictional accounts, and this too is scrutinised.

7. WAR IS KIND: A FINAL SUMMING UP

‘…a fascinating study … War still provides the most potent myths, and writers continue to be fascinated by it, just as they are by war’s effect on the individual. In just 300 pages, Christopher Coker provides an unusually rewarding feast of perceptive analysis.’ — Antony Beevor, The Telegraph

‘… an exciting book. …It serves as a timely reminder of everything that is good about reading fiction’ — War on the Rocks

‘Remarkable, both in terms of scope and detailed substance. … Coker’s writings on the subject of war are highly original and full of profound insights.’ — International Affairs

‘Coker has produced a book that not only helps readers to understand war, but also how to read literature purposefully. He draws from fiction insights that help mature one’s personal character and professional expertise … an extraordinary book.’ — Survival

‘Men at War offers a cultural history of war, giving an overview of the (male) soldier in western literature, crucially without glorifying the characters – or war itself. . . skilfully relate[d] . . . nuanced analysis . . [a] thoughtful and well articulated book.’ — European History Quarterly

‘This thoughtful analysis of the great characters of war literature has an insight or new perspective on every page. I read it in one sitting, the whole time feeling that I was in the hands of a master teacher.’ — Karl Marlantes, author of Matterhorn: A Novel of the Vietnam War

‘No military airport is without its soldiers nose-deep in books on men’s experience of war, from Homer to Andy McNab;  of course, it is not only soldiers who are influenced by this kind of book.  At a time when imagination all too often takes the place of experience in modern decision-making on conflict, Men at War is essential reading. Coker’s razor sharp critical insight puts war-fiction in its proper historical and contemporary context.’— Frank Ledwidge, author of Losing Small Wars: British Military Failure in Iraq and Afghanistan

‘To quote Ernest Hemingway, a writer’s standard of fidelity to the truth should be so high that his invention, out of his experience, should produce a truer account than anything factual can be.  By collecting, organising and analysing the best fictional accounts of war, Christopher Coker has enriched our understanding of conflict in a way few other modern books can match.’ — Martin van Creveld, author of The Culture of War and The Changing Face of War: Lessons of Combat from the Marne to Iraq

‘Coker is extremely widely read, both on and off the battlefield, and full of acute literary insights, wit, and a tremendous amount of human sympathy.’ — A.S.H Smyth