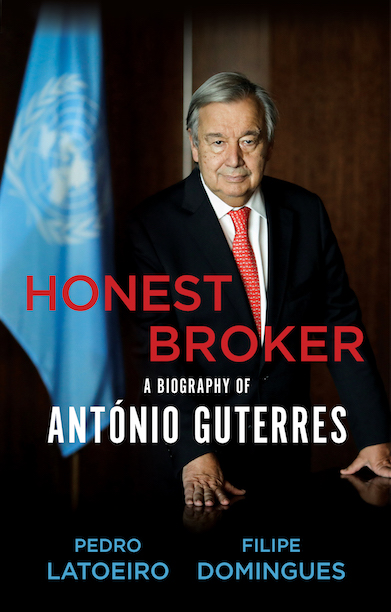 A Biography of António Guterres

The first biography of the UN Secretary-General, drawing on exclusive interviews with Guterres himself.

Based on exclusive interviews with the United Nations Secretary-General himself, this is the first book to explain how António Guterres thinks and operates, in an era of renewed great power competition and rising nationalism. The UN leader was re-elected for a second term starting in 2022; yet, after five years in the job, Guterres’ discreet diplomacy continues to intrigue even politicians, diplomats and analysts.

Honest Broker introduces a world leader to the world public, revealing Guterres’ profound religion convictions, and his views on issues as wide-ranging as women’s rights, gay rights, global terrorism and the political influence of social media. Pedro Latoeiro and Filipe Domingues tell the story of an extraordinary life, from Guterres’ long association with the Clintons, and the mistakes and defeats that led to his resignation as Portuguese prime minister; to his decade advocating for the world’s most vulnerable as UN High Commissioner for Refugees, and the diplomatic plotting to sabotage his candidacy for the top job.

Through over 120 interviews about Guterres’ life and career before he became Secretary-General, speaking with several former heads of state or government and senior UN officials, the authors help us understand what can be expected from the head of the United Nations as he confronts the challenges of the 2020s.

‘A fascinating insight into one of the key international figures of the past thirty years–what formed his character, his views and his ambitions, and what drives him now.’ — Sir John Holmes, former UN Under-Secretary-General and UK Ambassador to Portugal

‘Honest Broker reveals not only António Guterres’ leadership, his common sense and his courage to undertake reforms, but also his empathy with the most vulnerable in society. As Secretary-General, he faces the great challenge of being a present and active force in trying times.’ — María Ángela Holguín, former Minister of Foreign Affairs of Colombia

Pedro Latoeiro is a political and press adviser at Argentina's Lisbon embassy, and a former journalist for Portugal's top financial newspaper.

Filipe Domingues is Secretary-General of the Institute for the Promotion of Latin America and the Caribbean. A former Rádio Renascença journalist, he writes op-eds and columns for Portuguese media.