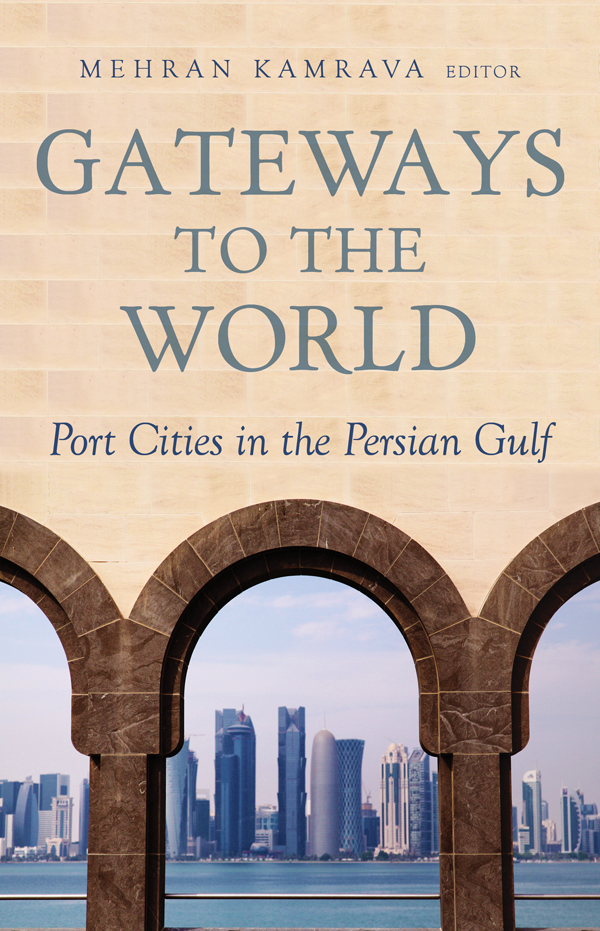 Gateways to the World

Port Cities in the Persian Gulf

A scholarly investigation of the lesser and greater port cities of the Persian Gulf, their hinterlands, their wider influence and future prospects

The Persian Gulf region has become home to some of the world’s fastest growing, most impressive cities, many of them with global aspirations. Gateways to the World presents an in-depth, systematic, and multi-disciplinary approach to the study of these cities. It begins with a broader look at how the emergence and significance of cities along the Persian Gulf waterway should be contextualized. It then moves to historical examinations of the emergence of national borders and boundaries, how they became ‘port cities’ of various kinds, what are the semantics of studying them, and what the glittering skylines and cityscapes and their remaining traditional neighborhoods mean for the international political economy and for the identity of their residents.

Alongside such aspiring global cities as Doha, Abu Dhabi and Dubai there are port cities that appear to have their best days behind them, and others that have largely retained their traditional fabrics. This book presents a comprehensive study of the nature and variety, the importance, and the domestic and international consequences of port cities along the Persian Gulf.

‘Gateways to the World’s contributors not only trace the history of port cities in the Gulf, but through expert insights shed new light on the changing and shaping of the human and urban environments of these port metropoles. In this, the contributors also draw attention to the cultural and spatial resources, and demographic consequences of port metropolisation. This work is truly path-breaking…’ — Anoush Ehteshami, Nasser al-Sabah Professor of International Relations, author of Dynamics of Change in the Persian Gulf

‘Mehran Kamrava has assembled a fascinating array of essays in this important volume. The book makes a unique contribution to the emerging research into port cities in the Persian Gulf and their global significance.’ — Arshin Adib-Moghaddam, Professor in Global Thought and Comparative Philosophies, School of Oriental and African Studies (SOAS)

‘This excellent book combines on-the-ground research with a review of theories about modernisation, urbanisation and the role of architecture in creating “brand awareness.” It takes an inclusive view of the Gulf region, with attention to both the Arabian and Iranian shores and the networks that tie them together. A valuable snapshot of the transformation underway there.’ —Lawrence G. Potter, Adjunct Associate Professor of International and Public Affairs, Columbia University, and editor of Sectarian Politics in the Persian Gulf

‘A timely collection. Focusing on ports, the volume successfully captures broader urban trends, particularly those engendered by the new political, global and knowledge economies of city-making that have shaped the region in recent years. Undoubtedly, this is a valuable addition to a growing body of literature on Gulf cities.’ — Nelida Fuccaro, School of Oriental and African Studies (SOAS), author of Histories of City and State in the Persian Gulf: Manama since 1800

‘This is an impressive, timely and well-constructed book exploring the contradictory nature of port cities in the Persian Gulf region. It brings the historic cites in Iraq and Iran into the critical debate around rapid urbanisation and ‘form verses substance’ in this highly image- and consumer- driven region.’ — Nasser Golzari, practicing architect and co-editor of Architecture and Globalisation in the Persian Gulf Region