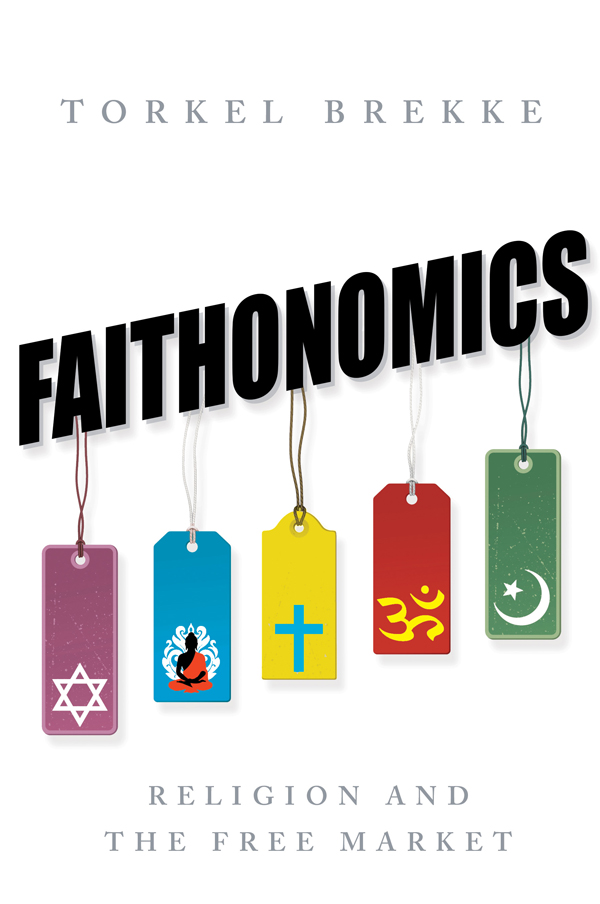 Religion and the Free Market

Deregulation of the religious marketplace will foster more harmonious societies, Brekke argues, with religions being treated exactly like any other commodity that can be bought and sold.

Faithonomics uses economic theory to provide a new and unorthodox view of religion in today’s world.

Many of today’s problems related to religion, like religious terrorism or rent-seeking by religious political parties, are easier to understand if we think like economists. Torkel Brekke looks at today’s religious marketplace and at the religious markets of the past, through sweeping histories of Christianity, Islam, Buddhism and Hinduism, to show that heavy regulation of religious choice by states has often caused unforeseen and negative consequences.

Drawing on ground-breaking research and case studies from around the globe, Faithonomics argues that religion should be treated exactly like any other commodity that can be bought and sold, like bottled water or haircuts, and that deregulation of the religious marketplace will ultimately foster more harmonious societies.

Introduction: The economic look at religion

PART ONE: THE MARKET FOR RELIGION

PART TWO: HISTORY – RELIGIOUS MARKETS IN OTHER TIMES AND PLACES

‘At a time when debate about religion is often dominated by talk of clashing ideologies, Faithonomics offers a refreshing set of tools for liberals to defend religious freedom.’ — The Financial Times

‘Religion and economics are usually regarded as separate domains, except for religious injunctions that prescribe or proscribe certain forms of economic behavior. In this unusual book, Brekke applies economic concepts—supply and demand, public versus private goods, oligopoly versus free markets, and so on—to the provision of the religious services offered by several faiths.’ — Foreign Affairs

‘Vibrant examples and the absence of unnecessary jargon make the book accessible to a wide audience of scholars, students, and policy wonks. Both supporters and critics will find Faithonomics to be rich in ideas and deserving of thoughtful consideration.’ — Sociology of Religion

‘The magic and brilliance of Brekke’s Faithonomics is that little by little, the author breaks down the reader’s reflex resistance to his argument (who, after all, intuitively thinks about their religious faith in economic terms?). By the end of this elegantly written book, he actually manages to sell it!’ — Aakash Singh, Professor of Political Science and Philosophy, JNU University (New Delhi) and LUISS University (Rome)

‘This book challenges the notion that communities of faith are static and insular … Using economic models to describe the competition of ideas in the multicultural marketplace, it presents a thesis that readers will find both startling and controversial, but difficult to ignore. This may become one of the most discussed books in religion in our time.’ — Mark Juergensmeyer, Professor, Global and International Studies, University of California, Santa Barbara, and co-author of God in the Tumult of the Global Square

‘A provocative and compelling book, not only about religion in the US but about religion universally. Brekke makes a good case for looking at religion as a commodity best left to the free market, the better to pacify violence associated with religion and to ensure quality in the provision of spiritual guidance to adherents/consumers. Clearly and concisely written, this is an important contribution to our understanding of how government and religion intersect.’ — David True, Chair, Philosophy and Religion Department Assistant Professor of Religion, Wilson College, PA and co-editor of Political Theology

‘Provocative and unconventional, this engaging book challenges dominant assumptions about religion as a public good in modern life, asserting that government involvement in religious markets produces negative consequences for society.  Critical, yet accessible, Faithonomics offers an economic prescription for the proper role of religion in public life to redefine the jurisdictional limits of religion and state, in order to cultivate a more peaceful understanding of moral citizenship.’ — Chad E. Seales, Associate Professor of Religious Studies, The University of Texas at Austin

Torkel Brekke is Deputy Director and Research Professor at the Peace Research Institute Oslo (PRIO). He is also a research theme leader at the Centre for Research on Extremism (C-REX) at the University of Oslo and works part time for the liberal think tank Civita. He has written and edited twelve books and numerous articles, mostly about religion and politics, including Fundamentalism: Prophecy and Protest in an Age of Globalisation (2012).