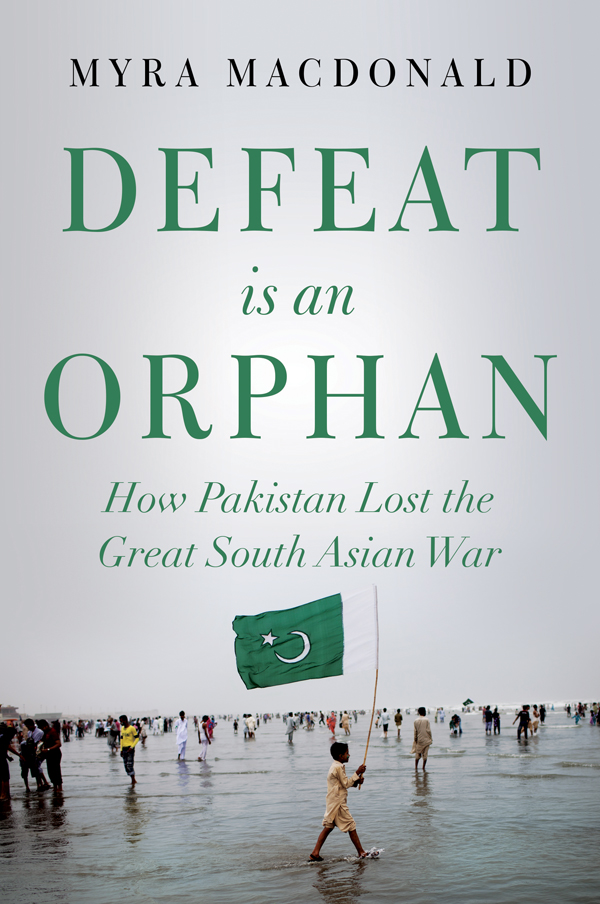 Defeat is an Orphan

A full and frank history of an enduringly bitter relationship, set against the background of Islamist militancy in Pakistan and India’s economic liberalisation

When India and Pakistan held nuclear tests in 1998, they restarted the clock on an intense competition that had begun with Partition. Nuclear weapons restored strategic parity, erasing the advantage of India’s much larger military. But the shield offered by nuclear weapons also encouraged a reckless reliance by Pakistan on militant proxies even as jihadis spun out of control within and beyond its borders. In the years that followed, Pakistan would lose decisively to India, sacrificing its own domestic stability in a failed attempt to assert its claim to Kashmir and influence events in Afghanistan.

Defeat is an Orphan tracks the defining episodes in the relationship between India and Pakistan from 1998, from bitter conflict in the mountains to military confrontation in the plains, from the hijacking of an Indian airliner to the Mumbai attacks. It is a frank history of an enduringly bitter relationship, set against the background of Islamist militancy in Pakistan and India’s economic leap forward.

‘A slashing indictment of Pakistani strategy by a journalist who has covered South Asia for decades … MacDonald shows in dramatic detail how this obsession with India (and in particular the problem of a divided Kashmir) undermined Pakistan’s democracy and economy, how peace opportunities were lost, and how Islamabad lost control of militant groups that it had initially fostered.’ — Andrew J. Nathan, Foreign Affairs

‘MacDonald lucidly explains how the Pakistani establishment’s strategic choices since the country’s nuclear tests in 1998 contributed to growing political instability at home and isolation overseas. …  At a broader level, MacDonald’s work demonstrates how the possession of nuclear weapons does not necessarily lead a country to pursue more moderate policies, and also highlights the difficulties and risks associated with trying to achieve a balance of power with a much larger rival.’ — Choice magazine

‘A compelling account of Pakistan’s recklessness in seeking to punch above its weight.  Drawing on years of first-hand experience and conversations with key players in the region, MacDonald leaves no doubt about the toll exacted on its people by Pakistan’s fruitless quest for parity with India. Its flawed nuclear thinking; its delusions of wresting control of Kashmir; its visions of mastery over Afghanistan, and its fatal obsession with the use of Islamist proxies are all deftly explored to explain why Pakistan has lost out in the Great South Asian War.’ — Farzana Shaikh, author of Making Sense of Pakistan

‘Conventional accounts of the decades-long conflict between India and Pakistan attribute it to some mixture of historical rivalry and opportunistic politics. But this book provides us with a compelling narrative about the way in which Pakistan’s relations with its giant neighbour have always been defined by the quixotic desire for parity, itself seen as the basis of a future friendship with India. From a constitutional demand by Muslim politicians in colonial times, MacDonald traces the career of parity as a diplomatic, military and terrorist idea into the present, in the process giving depth and coherence to the long history of Indo-Pakistani competition in South Asia and the world beyond.’ — Faisal Devji, author Muslim Zion: Pakistan as a Political Idea

‘Pakistan’s military strategy integrates the role of religious militant non-state proxies to fight its never-ending war with India. But, as MacDonald demonstrates, this approach by its generals has never borne any fruit and is likely to destabilise the region further with proliferation of tactical nuclear weapons.’ — Ayesha Siddiqua, author of Military Inc.: Inside Pakistan’s Military Economy

Myra MacDonald is a journalist and author specialising in South Asian politics and security. She was a correspondent for Reuters for nearly thirty years and is the author of the acclaimed Defeat is an Orphan: How Pakistan Lost the Great South Asian War, also published by Hurst.