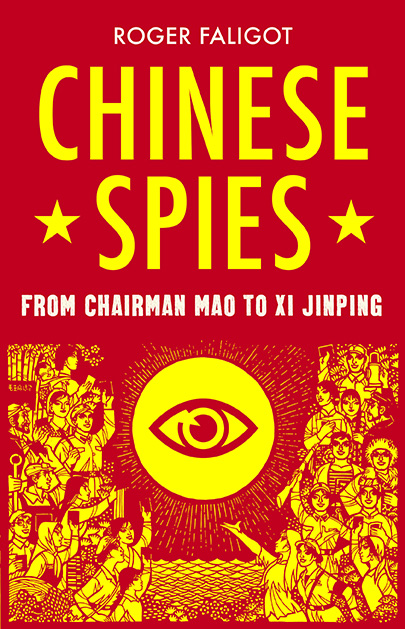 From Chairman Mao to Xi Jinping

Are the Chinese secret services now the most powerful in the world?

In 1920s Shanghai, Zhou Enlai founded the first Chinese communist spy network, operating in the shadows against nationalists, Western powers and the Japanese. The story of Chinese espionage has been a global one from the start.

Unearthing previously unseen papers and interviewing countless insiders, Roger Faligot’s astonishing account reveals nothing less than a century of world events shaped by Chinese spies. Working as scientists, journalists, diplomats, foreign students and businessmen, they’ve been everywhere, from Stalin’s purges to 9/11. This murky world has swept up Ho Chi Minh, the Clintons and everyone in between, with the action moving from Cambodia to Cambridge, and from the Australian outback to the centres of Western power.

This fascinating narrative exposes the sprawling tentacles of the world’s largest intelligence service, from the very birth of communist China to Xi Jinping’s absolute rule today.

‘With increasing tensions in the trade war between America and China, concerns about the future of democracy in Hong Kong, and the controversy surrounding Huawei’s 5G mobile networks, “Chinese Spies” is a very timely and important book.’ — The Wall Street Journal

‘Faligot’s detailed and fascinating account of Chinese espionage over the past century argues that “today the community of Chinese security and intelligence services is the largest in the world” … impressive in its level of detail.’ — The Sunday Times

‘Faligot, an intrepid French researcher, has for 40 years constructed an encyclopaedic private archive of Chinese intelligence. . . Chinese Spies, is an enjoyable treasure trove of conspiracy theories. . . . spicy enough to keep the general reader awake at night.’ — The Times

‘Faligot has an encyclopedic knowledge of the history of China’s spy agencies . . . contains many fascinating stories.’ — Financial Times

‘Roger Faligot fuses an encyclopaedic knowledge of this murky world and its characters with anecdotes that are sometimes comical and often colourful.’ — Le Point

‘This book could not be more timely … [it] includes fascinating spy stories …and colorful characters.’ — Asian Review of Books

‘This is an intense book. [Chinese Spies] is the result of huge research but also demonstrates the author’s immense knowledge of the politics, attitudes and identities of the political elite of the People’s Republic of China.’ — Asian Affairs Journal

‘This is a detailed overview of a difficult topic and certainly an important source for those wanting to study China’s agencies in more detail. …  Faligot and Lehrer have done an important job in producing an English-language edition of the earlier book, which will act as a starting point for historians and anyone interested in China’s “secret state” in future.’ — Diplomacy & Statecraft

‘China is not just a country with intelligence services, but rather an intelligence state. In this wide-ranging book, Faligot traces this trajectory from pre-revolutionary Shanghai to the present and reveals a phenomenon for which the West is ill-prepared.’ — Nigel Inkster, former Director of Operations and Intelligence, MI6, and Director of Transnational Threats & Political Risk, IISS

‘No stone is left unturned in Faligot’s astounding and exhaustive who’s who of Chinese espionage. The revelations prove as scary as the revolutions. Anyone inclined to welcome China’s rediscovered world stature needs to read this book.’ — John Keay, author of China: A History

‘An astounding and unmatched source book on the extraordinary reach of the PRC’s intelligence network … At once fascinating and chilling, it’s a book I found hard to put down.’ — Clive Hamilton, author of Silent Invasion

Roger Faligot is an investigative journalist and author of many books on European and Asian intelligence, including The Chinese Mafia in Europe and La Piscine, the first history of France's secret services. He has been a correspondent for The European, and Far East correspondent for Intelligence Online (1993–2018).