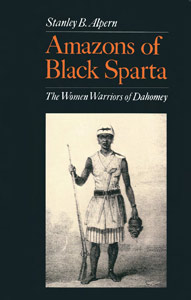 The Women Warriors of Dahomey

The only thoroughly documented Amazons in world history are the women warriors of Dahomey, an eighteenth- and nineteenth-century Western African kingdom. Once dubbed a ‘small black Sparta,’ residents of Dahomey shared with the Spartans an intense militarism and sense of collectivism. Moreover, the women of both kingdoms prided themselves on bodies hardened from childhood by rigorous physical exercise. But Spartan women kept in shape to breed male warriors, Dahomean Amazons to kill them.

Originally palace guards, the Amazons had evolved by the 1760s into professional troops armed mainly with muskets, machetes and clubs. By the 1840s their numbers had grown to 6,000. The Amazons served under female officers and had their own bands, flags and insignia: they outdrilled, outshot and outfought men, became frontline troops and fought tenaciously and with great valour till the kingdom’s defeat by France in 1892.

The product of meticulous archival research, Amazons of Black Sparta is defined by Alpern’s gift for narrative and will stand as the most comprehensive and accessible account of the woman warriors of Dahomey.

‘Alpern draws together the available material on this peculiar institution into an interesting and readable book. The author’s meticulous literary and archival research indicates that these females were indeed formidable warriors in the turbulent nineteenth-century era of the slave trade and subsequent European colonial conquest … Alpern’s work is an informative study.’ — W. Arens, Choice

‘Alpern does very well in assembling most of the evidence about these intimidating women whose courage impressed even the Foreign Legion. He produces a very detailed picture from a wide variety of European and African sources.  He provides a readable narrative of Dahomean military history from the state’s origins to its defeat by France in 1892, … [and] a mass of information on what these women wore, ate and sang, how they were recruited, trained and mobilised.’— Richard Rathbone, The Times

‘Stanley Alpern has written an impressively comprehensive study covering all aspects of this extraordinary military force… Alpern describes them in fascinating detail… Altogether he has made an important scholarly contribution to the history of nineteenth-century West Africa in which the Amazon achievement has until now been scarcely mentioned.’ — Christopher Fyfe, Journal of Imperial and Commonwealth History

‘… today they [the Amazons] exist as no more than footnotes to history. Only one scholarly work has been written about these women, Amazons of Black Sparta by Stanley B. Alpern.’  — Stieg Larsson, The Girl Who Kicked the Hornet’s Nest

‘A succint, yet comprehensive, survey of the history of Dahomey. … Alpern is by no means the first writer to give an account of the Amazons of Dahomey. Yet, his is by far the most detailed and most convincing. … Truly, Alpern’s portrait of the Amazons is a well deserved encomium to the courage and dedication of these intrepid women warriors. … [and] the feather in the cap of this extremely well-written book is [its] remarkable empathy.’ — Africa Review of Books

Stanley B. Alpern served in the US Navy in 1944-46, received his bachelor's degree from Harvard in 1947, and completed a master’s degree at Columbia University. After six years as a New York Herald Tribune copy editor and twenty-two years with the US information Agency, including five in Africa, he retired to France in 1977 to write about precolonial West Africa.  He is the author of Amazons of Black Sparta: The Women Warriors of Dahomey.